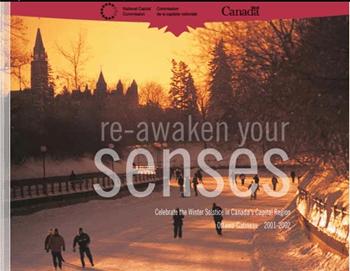 TEACHING MOMENT?: According to The Media Awareness Network (MNet), a program that strives to promote critical thinking in young people about the media, a 2001 brochure "featured a digitally enhanced photo on its cover." It was the National Capital Commission, the agency responsible for regional development Capital Region, that erred when making the decision to composite multiple views "of Parliament Hill from one end of the Rideau canal, with a more picturesque section of the 'world's longest skating rink.'" As part of its educational mission, MNet's web site explained, "At issue wasn't that the NCC had used a compilation of photos, but rather that they had presented this image as a real Ottawa scene."

The Media Awareness Network or MNET is program “for teachers and Parents in Canada” whose mission is to “promotes critical thinking in young people about the media.”

In the About Us section, they further explain that as a Canadian non-profit organization, they have been “pioneering the development of media literacy programs since its incorporation in 1996. Members of our team have backgrounds in education, journalism, mass communications, and cultural policy.”

Located in Ottawa, they aim to “promote media and Internet education by producing online programs and resources, working in partnership with Canadian and international organizations, and speaking to audiences across Canada and around the world.”

“The idea behind our work,” the MNet site states, is “based on the belief that to be functionally literate in the world today – to be able to ‘read’ the messages that inform, entertain and sell to us daily – young people need critical thinking skills.” StinkyJournalism.org and our sponsor, Art Science Research Laboratory agree.

Their  “Media education” programming includes a full spectrum of “television, film, video games, newspapers, advertising and popular music.” They have a “Parents section” offering “tips for talking to kids about the media, and advice on managing media use in the home.” In the the “Educators section” you find “teaching units and supporting materials” that are designed for the “Canadian provincial media education outcomes for grades K-12” but on a practical basis, the information still inspires ideas and applies anywhere.

The “Media Issues section” features and explores important subjects such as “stereotyping, violence, privacy, marketing to children, the portrayal of diversity in the media, and online hate.”

To learn more, start with one of MNet’s sections, “Photographic Truth in the Digital Era.”  The image accompanying this blog post–see photo and caption above– is from this WNet site’s section, and is labeled as one of their “teaching moments.”