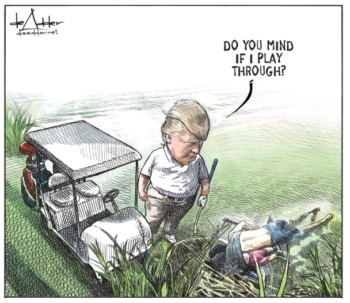 Canadian newspaper chain Brunswick News cut ties with cartoonist Michael de Adder. The announcement came after his cartoon depicting Pres. Donald Trump on a golf course. In the cartoon, Trump is asking if he can “play through” to the corpses of two dead migrants, evoking the Associated Press photo of El Salvador migrants Oscar Alberto Martinez Ramirez and his daughter Angie Valeria recently found dead in the Rio Grande.

In tweets, de Adder announced that he lost his cartooning gig, and noted that he “wasn’t fired. I was under contract not employed.” By e-mail, de Adder told iMediaEthics he wasn’t given a reason for his contract termination. “I was terminated immediately after 17 years of doing my job to the letter. In fact my presence was erased like I never worked there,” he wrote. iMediaEthics has tweeted Brunswick News Inc’s editor-in-chief for further comment.

However, Brunswick News Inc. denied the decision was because of the Trump cartoon, saying De Adder lost his gig because the company decided “weeks” earlier that it wanted a different cartoonist.

In a statement on Twitter, Brunswick News Inc. said,

“It is entirely incorrect to suggest Brunswick News Inc. cancelled its freelance contract with cartoonist Michael de Adder due to a cartoon depicting Donald Trump currently circulating on social media. This is a false narrative which has emerged carelessly and recklessly on social media. In fact, BNI was not even offered this cartoon by Mr de Adder. The decision to bring back reader favourite Greg Perry was made long before this cartoon, and negotiations had been ongoing for weeks.”

De Adder tweeted the cartoon in question on June 26.