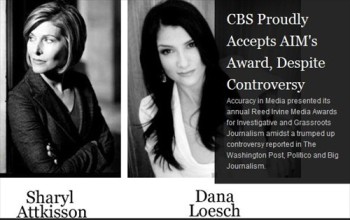 CBS News reporter Sharyl Attkisson has been criticized for “accepting an award from Accuracy in Media, a conservative group with a long history of promoting anti-gay views and conspiracy theories,” according to progressive media watchdog Media Matters for America.

Accuracy in Media identifies itself as a “non-profit, grassroots citizens watchdog of the news media that critiques botched and bungled news stories and sets  the record straight on important issues that have received slanted coverage.”

Attkisson received the Reed Irvine award.  Dana Loesch, editor of the conservative site Big Journalism, was also given the award.  According to POLITICO, Attkisson is “the first journalist from a mainstream news organization to win the award, which traditionally goes to conservative or right-wing organizations.”

The award was formally given to Attkisson at February 9th’s Conservative Political Action Conference.  It is a seven-year-old award “to honor those who have made outstanding contributions to the practice of journalism in the tradition of Reed Irvine by independently covering and reporting on news that was misreported or ignored by the mainstream press,” according to AIM’s press release.

Auletta argued journalists shouldn’t be involved with any group with “an agenda” because “then any reader of your work or viewer of your work has a right to question your impartiality or your fairness.”  Fouhy called Attkisson’s acceptance of the award “a mistake” and Steele labeled it an “integrity risk.”

CBS News told POLITICO that “CBS News journalists are regularly honored by a broad spectrum of organizations for their outstanding original reporting.”

The Huffington Post’s Michael Calderone reported that Attksson ended up not going to the award ceremony “following days of questions from outlets like Politico and the Washington Post over her decision to accept an award” from AIM.

Calderone noted that Media Matters “sent a letter to CBS News president David Rhodes and Washington bureau chief Christopher Isham, advising them against having Attkisson attend.”  See that letter here on Media Matters’ website.  Media Matters reported in a Feb. 10 post that a “CBS rep did show up to receive the award, but did not deliver the 8-10 minute speech Attkisson was reportedly scheduled to deliver.”  According to Accuracy in Media’s Feb. 11 post, CBS Washington bureau chief Chris Isham accepted the award for her.

The Washington Post noted that “the award carries a $1,000 prize, which Attkisson will donate to a charity headed by the family of slain border agent Brian Terry, whose death has been linked to Operation Fast and Furious.”

Accuracy in Media published a Feb. 11 post, “CBS Proudly Accepts AIM’s Awards, Despite Controversy,” in which it noted some of the media reaction to the award and that Attkisson’s lack of attendance at the ceremony was due to a last minute assignment.

We have written to Accuracy in Media asking for comment about the reaction to the award and will update with any response.

“Accuracy in Media was not shocked by Media Matters’ attempts to create controversy upon learning that an outstanding investigative journalist was to be awarded for reporting findings that could damage MMFA’s political allies. It was not AIM’s intention to seek conflict with any other organization. The 2012 Reed Irvine Award for Investigative Journalism was given to Sharyl Attkisson to demonstrate that ethical, unbiased reporting still exists in the mainstream press. Any organization  can line up a team of experts in an attempt to justify previously held conclusions. The fact remains, Ms. Attkisson’s bureau chief accepted the award with gratitude and great pride for her work.”