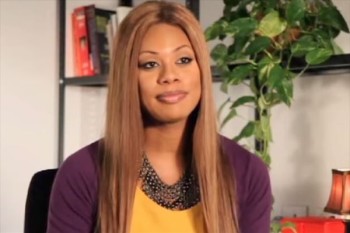 The op-ed was written by Kevin D. Williamson for the National Review and re-published by the Sun-Times. Williamson’s article was titled “Laverne Cox is not a woman.” Cox is transgender and one of the stars of Netflix series Orange is the New Black

She also is featured on the June 9 cover of Time magazine with an article called “The Transgender Tipping Point.” Below, see the cover.

Williamson’s article for the National Review, then re-published on the Sun-Times website, stated in part: “Regardless of the question of whether he has had his genitals amputated, Cox is not a woman, but an effigy of a woman.”

He went on, “Sex is a biological reality, and it is not subordinate to subjective impressions, no matter how intense those impressions are, how sincerely they are held, or how painful they make facing the biological facts of life. No hormone injection or surgical mutilation is sufficient to change that.”

Williamson also wrongly refers to Cox as a “him” and a “he.”

“The trans self-conception, if the autobiographical literature is any guide, is partly a feeling that one should be living one’s life as a member of the opposite sex and partly a delusion that one is in fact a member of the opposite sex at some level of reality that transcends the biological facts in question. There are many possible therapeutic responses to that condition, but the offer to amputate healthy organs in the service of a delusional tendency is the moral equivalent of meeting a man who believes he is Jesus and inquiring as to whether his insurance plan covers crucifixion.”

The article’s link on the Sun-Times now goes to an error page. It is still published on the National Review website.

Sun-Times editorial page editor Tom McNamee apologized in a statement to GLAAD for the paper’s failures in publishing the op-ed.

McNamee told GLAAD that the newspaper does publish views “we don’t agree with” and that it chose to publish the op-ed because it was “provocative.” His apology statement was also sent to BuzzFeed.

“Upon further consideration, we concluded the essay did not include some key facts and its overall tone was not consistent with what we seek to publish,” McNamee said.

He went on, “The column failed to acknowledge that the American Medical Association and the American Psychological Association have deemed transgender-related care medically necessary for transgender people. It failed as well to acknowledge the real and undeniable pain and discrimination felt by transgender people, who suffer from notably higher rates of depression and suicide. We have taken the post down and we apologize for the oversight.”

GLAAD and Women, Action & The Media had called for the Sun-Times to apologize. There was also a Change.org petition, GLAAD noted.

iMediaEthics asked Williamson for a response to the criticism and the unpublishing. He pointed us to his blogpost, where he wrote about the unpublishing and called the Sun-Times apology “limp” and “not true.”

Williamson wrote, “To be honest, I was not aware that the Chicago Sun-Times was in the habit of republishing my National Review pieces. Given the recently revealed gutlessness of that newspaper’s editors and management, I’d like to request that they never run another.”

He also pointed out that the Change.org petition wanted the Sun-Times to fire him, which is impossible since he doesn’t work for them, and he said that he was “among the first signers of the petition.”

Further, Williamson criticized McNamee, writing, “Tom McNamee et al. are a disgrace to a proud newspaper tradition, and an unhappy reminder that post-operative transsexuals are not the only men who have had their characteristic equipment removed.”

The Sun-Times published a reader’s letter complaining about the op-ed on June 2.

iMediaEthics has written to the Sun-Times, and Laverne Cox’s agent for comment.