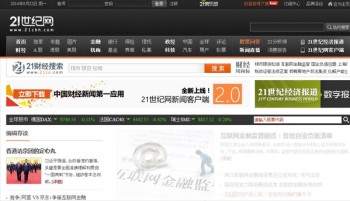 China’s The 21st Century Business Herald was closed by the country after being accused of extorting more than 100 companies for favorable press, Reuters reported.

“The 21st Century Herald website has been shut down, all website qualifications and personnel have been dismissed, and the company written off,” Chinese state-owned news outlet Xinhua said, according to Reuters.

The 21st Century Herald identifies itself as “a leading business newspaper in China with a daily circulating [sic] of 762,000.”

Desipte the claims that the site was shut down, iMediaEthics was able to access the Herald‘s website, which contained articles dated Sept. 17. iMediaEthcs has asked about this discrepancy.

How the Shutdown Evolved

In early September, Shanghai police arrested two editors from 21cbh.com, the website for the Business Herald, among other executives and PR people, China’s People’s Daily reported, according to Caixin, a Chinese media group.

The accusations of extortion were against some of 21cbh.com’s staff and two public relations firms, Xinhua News said, according to Bloomberg.

The editors were charging companies that needed good publicity fees and if they didn’t pay up, they would be criticized until they paid for ads. The fees were between approximately $33,000 and $49,000, Reuters said.  Caixin reported:

“The journalists primarily targeted big corporations and companies that were preparing to go public or for a major event such as restructuring that would affect share prices, Xinhua reported. They would seek the firms out and charge them a big fee for publishing stories that exaggerated merits and downplayed risks. Those that refused to pay were often hit with scathing reports and forced to buy ads with 21cbh to remove the stories from the website.”

The Chinese State Administration of Press, Publication, Radio, Film and Television launched the investigation into the extortion, Reuters said.

iMediaEthics has written to the administration for more information concerning the investigation, the charges, and the website’s removal.