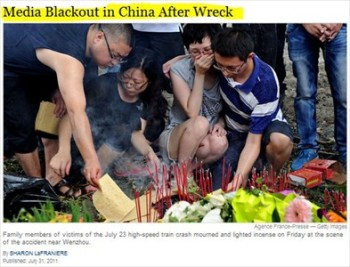 As a result, newspapers had to re-do newspaper editions and substitute “cartoons or unrelated features” where stories on the crash had been planned.

For example, The 21st Century Business Herald and China Business Journal “tore up” articles on the train crash. Hong Kong’s journalist association “protested” the censorship, according to the Times.