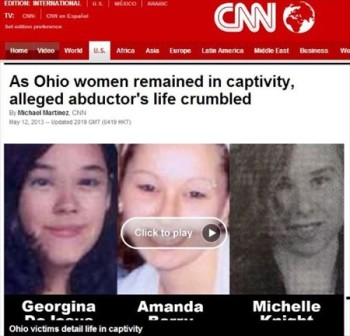 CNN scrubbed an error of this article about the suspect in the Cleveland kidnappings. (Credit: CNN , screenshot)

CNN’s Michael Martinez made an error in his May 12 story on the Cleveland kidnappings case and suspect Ariel Castro.  But, at some point since the story’s publication, CNN or Martinez spotted the error and instead of posting a transparent correction, simply scrubbed the bad information.

The May 12 story wrongly reported that kidnap victim Amanda Berry was best friends with Ariel Castro’s daughter Arlene.  But, as the CNN report noted elsewhere, Arlene Castro’s friend before the kidnappings was actually Gina DeJesus — not Berry. DeJesus, Berry and Michelle Knight were all found last week in Castro’s house after each were kidnapped roughly a decade ago.

But, when iMediaEthics went to the CNN article May 14 to send a correction request, the error was all of a sudden MIA.  The article originally read:

“Last month, Ariel Castro became a grandfather for a fifth time — to a boy borne by Arlene Castro, the best friend of Amanda Berry, the second captive in Ariel Castro’s home.”

As of May 14, the article simply read:

“Last month, Ariel Castro became a grandfather for a fifth time — to a boy borne by Arlene Castro.”

CNN just deleted the error.  And there was no correction on the article. iMediaEthics has asked CNN why the error was deleted and not corrected, if CNN will post a transparent correction, and who scrubbed the error – a CNN editor or Martinez. We’ll update with any response. See below a side-by-side comparison of the before-and-after text.

Other Changes to the Article?

iMediaEthics compared the original article we viewed over the weekend with the updated article. The two versions were almost identical, but there were a few changes.

Besides the above error, CNN changed the text to downgrade the friendship between Arlene Castro and Gina DeJesus.  The article originally described Arlene Castro and DeJesus as “best” friends, but later, that was changed to read that they were just “good” friends.

One other notable change grabbed iMediaEthics’ attention. In a section about Knight’s kidnapping, CNN deleted about a dozen words saying that the Cleveland police took Knight out of the FBI missing persons database “because police couldn’t locate her family to confirm Knight was still missing.”

Was this because of another factual error?

iMediaEthics checked with the Cleveland Police Department. But, City of Cleveland Chief of Communications Maureen Harper confirmed what CNN originally reported was accurate. Harper explained that NCIC and LEADS guidelines require confirmation from a family member or other person to maintain missing persons status, which the police couldn’t get in 2003. So, the police did take Knight off the NCIC list but it kept her case “open” and “checked on the case” all the years she was missing. Harper wrote:

Earlier this month, iMediaEthics questioned if the media should name the young daughter of Amanda Berry. While many news outlets have done so, both the Globe and Mail and the New York Times said they won’t be naming the girl.

Last week, Cleveland ABC-affiliate WEWS apologized for reporting on the criminal past of Charles Ramsey, who helped Berry escape.