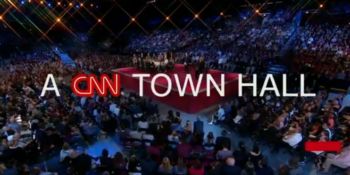 A screenshot from the CNN town hall.

This week, a controversy was stirred up about CNN’s “Stand Up: The Students of Stoneman Douglas Demand Action Town Hall,” when one of the students who survived the Parkland, Florida school shooting, Colton Haab, said that CNN tried to script his participation.

Haab made the “scripted” claim to Florida ABC-affiliate WPLG. He said, “CNN had originally asked me to write a speech and questions, and it ended up being all scripted.” As a result, he said he didn’t want to be involved.

CNN denied the allegation, saying in a tweeted statement that “CNN did not provide or script questions for anyone in last night’s town hall, nor have we ever.” CNN said Haab’s father “withdrew his name from participation.”

After doctored e-mails were circulated, CNN released its e-mails with Haab and his father, which show that Haab submitted several questions, and CNN wanted him only to ask one. iMediaEthics has written to CNN to ask if all students were limited to one question, like Haab would have been, and if CNN knows who is responsible for the doctored e-mails.

CNN said it found out about the doctored e-mails after Huff Post and Fox News received a copy and asked CNN to verify the authenticity of them. iMediaEthics has uploaded copies of CNN’s e-mails with the Haabs here and here.

A CNN spokesperson told iMediaEthics, “The Stand Up: The Students of Stoneman Douglas Demand Action Town Hall was intended to be a forum for students, parents and teachers to speak directly to the elected leaders and stakeholders that are at the center of this critical issue. It is unfortunate that an effort to discredit CNN and the town hall with doctored emails has taken any attention away from the purpose of the event.  However, when presented with doctored email exchanges, we felt the need to set the record straight.”

CNN response to the claim of a "scripted question" for last night's town hall: pic.twitter.com/Mz1hMqqfkw

Haab went on Fox News’ Tucker Carlson Tonight and said the CNN producer “wrote that question out for me,” Mediaite noted.

Mediaite obtained copies of e-mails between the Haabs and CNN’s producer, Carrie Stevenson, showing that Colton Haab sent several questions to CNN. Then, Stevenson e-mailed Haab’s father, Glenn Haab, to say that Colton’s questions were “way too long” and that she and Colton had talked on the phone about his questions.

“This is what Colton and I discussed on the phone that he submitted. He needs to stick to this,” she wrote, listing one of Colton Haab’s several questions. Then, Glenn Haab responded that “We are not actors nor do we read from a script. We are real people and a lot of thoughts went into these questions. The short background before each question is extremely relevant to each question. I [sic] you want Colton only to read this one short question – we are not the right people for your own hall meeting.”

Both the Huffington Post and Fox News got copies of doctored versions of the e-mails, to remove the phrase “that he submitted” from Stevenson’s e-mail to Haab’s father, which suggested that Stevenson and Haab had worked together on writing the question, instead of the question being one Haab wrote himself, Washington Post‘s Erik Wemple and Mediaite reported.

Wemple noted on Twitter and in an article that, “CNN has maintained that it paired a question submitted by Colton Haab with a prefatory statement that he’d made previously on a ‘Fox & Friends’ appearance. Which is to say, they wanted Haab to merely recite what he’d already said.”

CNN is now releasing copies of the network's email exchanges with the Haab family after receiving inquiries this afternoon from the HuffPost and Fox News.

As part of their due diligence efforts, Fox News and HuffPost presented CNN with the exchanges. CNN alleges that one of the emails forwarded by these outlets cuts off a few words that are critical to understanding the back-and-forth.

CNN has maintained that it paired a question submitted by Colton Haab with a prefatory statement that he'd made previously on a "Fox & Friends" appearance. Which is to say, they wanted Haab to merely recite what he'd already said.

Here's the email released by CNN that represents that interaction. Note the part that indicates "that he submitted": pic.twitter.com/ajHOBU1V8T

Now have a look at the email that CNN was asked to comment upon Friday afternoon. "that he submitted" isn't there : pic.twitter.com/pz4dr841ov

It bears pointing out that CNN producer Carrie Stevenson talked on the phone with Colton Haab about the question, in which the student himself proposed pairing his comment from "Fox & Friends" with the question he'd proposed, according to CNN.