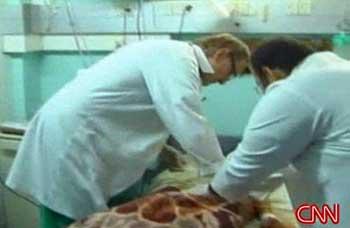 FAKE VIDEO FROM GAZA? While much of CNN's clip of the medical activity is below camera level, the doctor on the right with the dark brown hair who appears to be doing CPR, according the experts, is not in the correct position for doing real chest compressions.

The claim captured in the title and caption of the video is dramatic: “Cameraman watches brother die: CNN’s Michael Holmes reports on the Gaza cameraman who recorded the death of his own brother.” When bloggers first raised doubts and suggested the scene was staged, the video was quickly removed by CNN but soon reemerged with the video producers’ denials.

iMediaEthics has recently made our own examination …and agree with Little Green Footballs and other bloggers that there’s something very suspect about a CNN video of a dying boy in Palestine from the perspective of science.

The footage in question was shot by Ashraf Mashharawi and features his 12-year-old brother being brought into a Gaza City hospital after being hit with shrapnel.  A Norwegian medical team rushed to resuscitate Mahmoud Khalil Mashharawi to no avail, but the CPR efforts shown in the video are questionable.

While much of CNN’s clip of the medical activity is below camera level, the practitioner with the dark brown hair, who appears to be doing CPR, is not even remotely in the correct position.

For starters, the practitioner’s hands are in the wrong spot.  CPR compressions are administered centra-sternally — for children, that’s directly between the nipples. This man had one hand that may have been close to that site but his other hand was on the child’s lower abdomen.  The pressure he is using would also be insufficient to sustain the circulation. Compressions require a firm push, not a jiggle. Additionally, CPR requires either one hand interlocked in the other or the heel of one hand over the heart, never two hands placed apart. In short, what’s shown is bad CPR and it’s unlikely anyone in the healthcare field would do such a poor job, particularly on a child.

“If that child was relying on the chest compression to survive, he/she certainly would have died during the compression, if you can call it that.  This is a skill usually taught at any CPR class that are taken by all physicians, nurses, paramedics, etc.,” said Dr. Lee.  “The monitor showed question marks, which is a sign that there is no signal coming to the monitor.  It could be because the patient is already dead, or the monitor device not properly used (EKG leads or pulse oximetry probe not on).”

Additionally, there is no evidence of artificial ventilations being delivered to the child.  If the child was rushed to the hospital, he would have initially been ventilated with a manual device until he was hooked up to a respirator.  Neither of those things are present.  While there is an unknown box-like object in the corner of the room, if it is the vent, it is not hooked up to anything.

Another strange factor is that the blonde practitioner (doctor?) places heart monitoring pads on the child despite the fact that he is already hooked up to the heart monitor.

There are very few explanations to what is being presented in this video.  The people performing CPR –the video voice-over says they are doctors–are not qualified to do so or negligent or, more likely, the child’s resuscitation was reenacted for effect.