Colorado HS Newspaper to Shut Down, Principal Didn't Like Story About Student Death?

Colorado HS Newspaper to Shut Down, Principal Didn’t Like Story About Student Death? 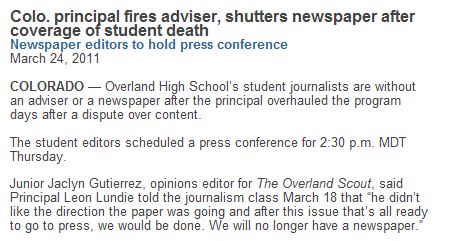 The Student Press Law Center's Adam Goldstein wrote about the cause of a Colorado high school. (Credit: SPLC)

A Colorado high school newspaper has been shut down after its principal took issue with the newspaper’s article about  a student’s death before it was to be published, Student Press Law Center (SPLC) reported. And, the newspaper’s adviser of fourteen years, Laura Sudik, was removed from her post in mid-March, according to the Denver Post.

The high school is Overland High School and its newspaper is the Overland Scout.  The article in question was singled out during prior review.

The story will be published in this issue, which will also be its last, according to reports.  The Scout will also publish a senior issue, but that won’t be regular reporting — just a “remembrances” issue of senior anecdotes.

The changes to the newspaper came after a student reporter, Lori Schafer, wrote about the death of student Leibert Phillips.  In that article, Schafer included comments from a teacher and Phillips’ mother and reported on the cause of Phillips’ death. (Read the manuscript in question here.) The principal reportedly has prior review of articles before publication.

She cited Phillips’ autopsy and offered the following narrative for cause of death:  Phillips sprained his ankle in a school wrestling match.  The school didn’t tell his mother. When his mother took him to the hospital that night, they learned he fractured his ankle.  A few weeks later, he collapsed and died “because of the fracture he received at the wrestling match, it caused broken vessels which created a blood clot that went up into his lungs.”

SPLC reported that Scout’s opinions editor, Jaclyn Gutierrez, claims school principal Leon Lundie “told the journalism class March 18 that ‘he didn’t like the direction the paper was going and after this issue that’s all ready to go to press, we would be done. We will no longer have a newspaper.'”

As the Denver Post explained, Schafer brought the article to Lundie prior to publication.  He responded that her account of the cause of death was inaccurate. Schafer offered proof that she was correct. Lundie then said her statement that the school didn’t call the family was inaccurate and that he could prove it with a call log, but that he wouldn’t provide the log because of a privacy act.

“The student was injured during a wrestling tournament … He was in the training room with ice on his leg,” Cherry Creek School District spokesperson Tustin Amole is quoted by the Aurora Sentinel as saying. “He left without telling anyone he was leaving … That was the piece of the story that [the principal] was concerned about.”

Gutierrez reportedly added that Lundie’s comments on the story included that “we were talking to a very emotional mother and this [issue] is too big for a high school paper.”

Regarding the newspaper’s ending, Amole commented that the principal was changing the class from journalism to  communications, like “universities in Colorado.” He removed the teacher because the principal “feels that someone different would be a better fit for that particular kind of class.”

“On Tuesday the students are told they have a fact wrong, on Thursday they prove that they have that fact right, and on Friday the journalism teacher is fired and the newspaper is canceled for the rest of the year.  That doesn’t sound to me like a well thought-out, reasoned change in the course of the program.”

SPLC reported that Amole stated: “My understanding was that the article only contained an interview with the mother of the child that died. The suggestion was made that they talk to the coach and others to create a more balanced article.  I don’t know that the article was canceled.”

Meanwhile, Goldstein criticized that sentiment.  “Where’s the opportunity to balance” comments by the dead student’s mother, he reportedly wondered.

“Anything you would add to contradict any of those things would be, at minimum, in poor taste and possibly factually incorrect when you’re talking about the coroner’s report.  The idea that there should be balance to a mother’s memories of her dead son is a little grotesque.”

Phillips’ mother also stands by the article calling it “beautiful” and saying she “felt better after reading it, knowing someone was behind me and supporting me.”

Colorado High School Press Association (CHSPA) addressed a suggestion that the newspaper would be an online-only publication moving forward.  But, countering that possibility, CHSPA president Carrie Faust, who also teaches in that district, said that wouldn’t be allowed under current district policies.  “Acceptable use policies” for the district ban the publication of students’ law names and photos online.

SPLC also reported that the Scout and the administration have had problems before.  For example, Gutierrez explained for its second issue this year, the administration called an article “too negative” and  another “too graphic” but still calling it “nicely written.”

At that point, the administration started prior review of the newspaper pre-publication. The article that was called “too graphic” was a first-person reflection by Shafer on her brother committing suicide and its affect on her.

Lundie has also “questioned the accuracy” of a Scout story about the school’s “low graduation rates and testing scores, even though Gutierrez said Lundie had proposed the story, provided the statistics and was quoted.”

The students are “consulting” on this issue with the ACLU and SPLC.

Faust reportedly commented to the Denver Post about Scout reporting:

“I’ve read all of the articles, and none of them have any defamatory information or even bad writing.  In my opinion, there is no reason for any of these to have been censored or even questioned.”

“The newspaper has been a part of the school for decades,” Schafer is quoted as saying in an ACLU press release.  “Principal Lundie thinks he can just come and shut down the paper during his first year of oversight of the school because it does not help in his goal of creating the ‘perfect image.’”

The SPLC stated that “Colorado is one of seven states with extra protection of student journalists. According to the Colorado Student Free Expression Law, student publications can only be restricted if they contain obscene or defamatory information, or if they promote unlawful acts, the disruption of school or a violation of someone’s right to privacy.”

Goldstein also expressed his concern about the changes at the school’s newspaper in an article for the Huffington Post:

“That’s right; Principal Lundie felt the article lacked balance. So strongly that, after this last issue goes to press, he’s never letting the students publish another newspaper. (Supposedly there’s a senior issue that’ll be printed with no news, just senior anecdotes, but I suppose we’ll have to wait and see if Principal Lundie feels that someone’s positive memories of band camp lack balance.)” Goldstein wrote, noting the students are calling for the newspaper to be “reinstated to regular publication with its adviser restored to her position, and an end to future censorship or mandatory prior review by administrators.”

iMediaEthics is writing the various parties involved for comment. We will update this story with any responses.

Colorado HS Newspaper to Shut Down, Principal Didn’t Like Story About Student Death?