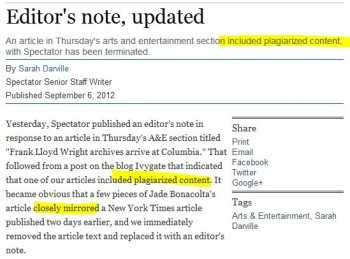 The Columbia Spectator fired reporter Jade Bonacolta for an article with “plagiarized content” from the New York Times and making up a quote.  The Spectator is Columbia University’s student newspaper.

A Sept. 6 editor’s note explains that the Spectator unpublished and retracted Bonacolta’s article, which “closely mirrored” an article in the New York Times.  The note explains that the Spectator’s review of “the writer’s interview notes, the press materials released by the University, the articles themselves, and conversations with the writer…concluded  that the writer both lifted text from the Times piece and created a false quote using material from the Times piece.” According to the editor’s note, the Spectator’s review of Bonacolta’s work indicated it was a one-time incident.

The editor’s note, signed by “Spectator Senior Staff Writer” Sarah Darville, added that the incident was spotted by the IvyGate blog and “at least three paragraphs of the story were largely identical to those in the Times piece.”   Jim Romenesko also published Darville’s “note” to the paper’s staff about the firing.

IvyGate, a blog about Ivy League universities, had written Sept. 6 that a “tipster alerted us to some, let’s say, similarities” in the article and posted a screenshot of the article, as well as side-by-side comparisons.

We wrote to Darville asking if the Spectator has established any new practices to prevent plagiarism moving forward.  Darville told iMediaEthics that the newspaper is “confident that this is an isolated incident, and we plan to use it as point of discussion with our staff moving forward. Plagiarism has not been an issue for Spectator in the past and we don’t expect it to be one in the future.”

“That said, Spectator has held training programs for new staff members for many years, and that training includes a sizable segment on ethics. Fall 2012 training will begin in just over two weeks, and our policies for quotation, citations, and accuracy are made clear there and in the daily interactions between editors and writers.”

We’ve written earlier this week about plagiarism out of Arizona State University.  As we wrote Sept. 5, Arizona newspaper the East Valley Tribune apologized for an unnamed Arizona State University intern’s plagiarism.  ASU’s student newspaper the State Press announced Sept. 1 it fired reporter Raquel Velasco for plagiarism, and the Phoenix New Times reported that Velasco was the same student who plagiarized at the Tribune. ASU’s journalism school’s “academic integrity policy” notes that “If any student is found by the committee to have engaged in academic dishonesty in any form – including but not limited to cheating, plagiarizing and fabricating – that student shall receive a grade of XE for the class and will be dismissed from the Walter Cronkite School of Journalism and Mass Communication.”