Curt Schilling Off ESPN for Baseball Season after Tweet, E-mails 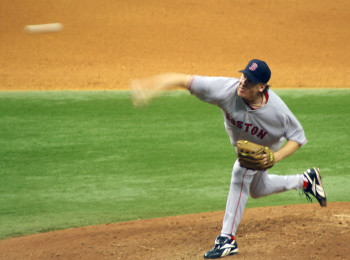 Former Boston Red Sox pitcher Curt Schilling has officially been suspended by ESPN for the rest of  the baseball season after a tweet about Muslims and Nazis, and his e-mails with sports blog Awful Announcing, ESPN reported Sept. 3.

As iMediaEthics previously reported, Schilling was suspended last month after he posted on Twitter an image of Adolf Hitler doing the Nazi salute with the sentences: “It’s said only 5-10% of Muslims are extremists. In 1940, only 7% of Germans were Nazis. How’d that go?” Schilling commented on the image, “The math is staggering when you get to true #s.” Schilling later called the tweet a “bad decision” that was “100% my fault.”

Then Awful Announcing published e-mails Schilling sent complaining about its coverage of his suspension and saying in part to writer Dan Levy, “I think you lack integrity, I think you lack an ounce of pride in your work and I think you’re a weakling to submit to personal b——t attacks and lies in a public facing forum of a person you’ve never met, and don’t have the first idea about off the field.”

ESPN announced that because of the one-two punch, Schilling won’t be back on “through the remainder of the regular season and our Wild Card playoff game.” The full ESPN statement reads:

“At all times during the course of their engagement with us, our commentators are directly linked to ESPN and are the face of our brand. We are a sports media company. Curt’s actions have not been consistent with his contractual obligations nor have they been professionally handled; they have obviously not reflected well on the company. As a result, he will not appear on ESPN through the remainder of the regular season and our Wild Card playoff game.”

Curt Schilling Off ESPN for Baseball Season after Tweet, E-mails