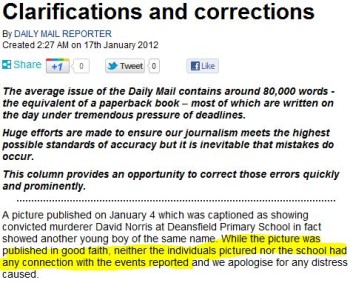 The Daily Mail apologized for running the wrong photo in its January 4 edition that misidentified a “young boy” as “convicted murderer David Norris,” Tabloid Watch reported.

The Jan. 17 apology ran in The Daily Mail’s corrections column and read:

“A picture published on January 4 which was captioned as showing convicted murderer David Norris at Deansfield Primary School in fact showed another young boy of the same name. While the picture was published in good faith, neither the individuals pictured nor the school had any connection with the events reported and we apologise for any distress caused.”