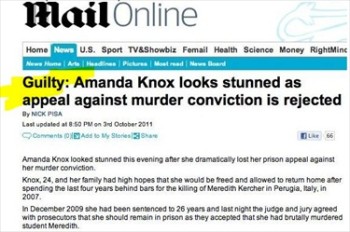 The Daily Mail was busted for publishing an inaccurate pre-emptive story on the verdict in the Amanda Knox appeal trial, according to Gawker.

The Daily Mail’s story falsely claimed that Knox’s appeal was “rejected,” when, in fact, yesterday an Italian appeals court freed her. Knox was convicted with Raffaele Sollecito in 2009 of murdering her roommate Meredith Kercher.

“Amanda Knox looked stunned this evening after she dramatically lost her prison appeal against her murder conviction.”

The Daily Mail went on to describe the reactions of family of the murder victim Meredith Kercher and the prosecutors and the next course of action for Knox.  Interestingly, the Daily Mail quoted “prosecutors” on their reactions to the incorrect news that Knox was convicted.

The prosecutors are quoted as saying “justice has been done” and that “on a ‘human factor it was sad two young people would be spending years in jail.”

A Google search of the “human factor” quote only produces the Daily Mail’s bad story and stories about the Daily Mail’s epic fail, suggesting that the quotes were made up. iMediaEthics has written to the Daily Mail to ask where the quotes came from, if it will be apologizing for the fake story, and how the story was published in the first place.

The story has since been removed. According to Seattle Weekly, the fake story was only posted “for about 30 minutes.”

Malcolm Coles is credited with spotting the fake story before it was removed from the Daily Mail’s website. Coles, who describes himself as “an SEO consultant and freelance content strategist from London,” posted screenshots of a Google search indicated the original story, by Nick Pisa.

Coles noted that the Sun, Sky News and the Guardian all “claimed she’d been found guilty,” but the Daily Mail’s error was the worst.  According to Coles, “the Sun published a story” like the Daily Mail but he didn’t have an image as evidence.