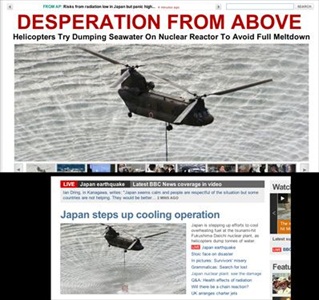 JapanProbe.com compared two screenshots of coverage a Japan disaster –the “aerial water dumping” in Japan because of a nuclear reactor.

It noted that screenshots suggested the Huffington Post sensationalized the story.

Whereas the BBC’s headline stated:

The Huffington Post’s headline for the same story had quite a bit more dramatic flair, reading:

See the screenshots here on JapanProbe.com.