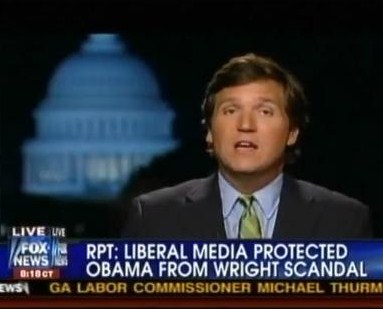 The Daily Caller's Tucker Carlson in an interview on Fox News talked about an upcoming JournoList story on his site. (Credit: YouTube)

Each time The Daily Caller publishes a set of e-mails from JournoList, the now-defunct listserv started and formerly operated by Washington Post liberal blogger Ezra Klein, the topic seems to take the media focus.

When the Daily Caller outed private e-mails from the listserv, starting in June, Klein quickly disbanded the group.

The Daily Caller, which was the first to get access and publish from JournoList’s archives, has been criticized for publishing only snippets of archived e-mails instead of a full data dump, WikiLeaks style, which would have provided context.

The first publication of excerpts from JournoList emails came in June, and soon resulted in blogger David Weigel’s resignation from The Washington Post.

In his own JournoList e-mails, Weigel bashed the conservatives that he was covering for The Post.

Among the highlights revealed from Weigel’s JournoList e-mails are hopes that Rush Limbaugh dies and opinion that Matt Drudge is a “gay bashing” liar :

Recently, JournoList e-mails about the Rev. Jeremiah Wright controversy during the Obama campaign were published. The nearly two-year-old emails seem to suggest that journalists schemed across varied news outlets to spin stories about Wright, Pres. Barack Obama’s pastor, to mitigate harm as facts were being revealed. Brainstorming sessions via the listserv included trying to conceive ways to soften the blow of Wright’s provocative comments–including his suggesting that Americans are responsible for the 9/11 terrorism attacks, and “repeated denunciations of the U.S.” (Wrights comments were reported by ABC News and other media outlets at the time).

The Daily Caller’s accusation that the e-mails show “the media plotting to kill stories” about Wright doesn’t seem to be supported by JournoList excerpts that StinkyJournalism has seen so far. The ethical problem for StinkyJournalism is that JournoList journalists appear to have worked across media outlets–not to seek the truth and report it–but to spin doctor facts instead.

The excerpts that The Daily Caller published indicate more of a back-and-forth of opinions. While some journalists did suggest ways to kill the Wright controversy, they were met by others who dismissed the idea.

If the Daily Caller would publish all of the e-mail excerpts in context, then iMediaEthics and the public at large could judge for themselves if the e-mails provide conclusive evidence of a conspiracy or not.

This is not to say, though, that anyone should minimize what has already been revealed.

It was not ethical, for example, that Spencer Ackerman of the Washington Independent suggested on JournoList that a possible strategy would be to brand a conservative journalist racist. “Take one of them—Fred Barnes, Karl Rove, who cares—and call them racists. . . . This makes them ‘sputter’ with rage, which in turn leads to overreaction and self-destruction,” Ackerman wrote.

The Nation’s Chris Hayes opted however for the “if none of us cover it; it does not exist” approach among his listserv colleagues.  He wrote: “What I’m saying is that there is no earthly reason to use our various platforms [read news outlet columns or stories] to discuss what about Wright we find objectionable.”

Fred Barnes wrote in The Wall Street Journal July 22 about the listserv e-mails. Barnes, the executive editor of conservative magazine The Weekly Standard and a contributor to Fox News, suggested that JournoList members didn’t support Ackerman’s suggestion not because of any ethical nobility but because “the strategy would fail or possibly backfire.”

National Review’s Daniel Foster wrote July 20 that it’s important to note most of the JournoList members who responded to Ackerman’s suggestion are columnists or opinion writers. As far as iMediaEthics is concerned, this still does not get JournoList members off the hook. The public deserves truthful, unsuppressed and unspun independent information from its media commenters.

The Daily Caller first featured the JournoList comments on July 20.

Why not publish all the emails?

Greg Sargent wrote for the Washington Post’s Plum Line blog July 22 that Carlson said The Daily Caller will not publish the full e-mails from JournoList.  Sargent wrote that “liberal bloggers who have seen snippets of their emails published by the Daily Caller had challenged [editor-in-chief Tucker] Carlson to publish full email chains rather than cherry-picked fragments out of context.”

“Indeed, it’s really hard to grasp the justification for not publishing fuller chains, particularly since the Daily Caller apparently views these emails as so newsworthy,” Sargent wrote, suggesting that the fuller context of the e-mails wouldn’t lead to suggestions that the group was “secretive and omnipotent political cabal.”

Sargent disclosed that he was a JournoList member, but not since he started writing for The Washington Post.

Carlson defended in The Daily Caller July 22  that the reports quoting JournoList don’t take anything out of context.

Carlson wrote that The Daily Caller doesn’t intend to publish the whole archive because many of the comments in the e-mails are “pretty banal” and “a lot of these guys” writing on JournoList are both “partisan hacks” and “pedestrian thinkers.” StinkyJournalism does not buy this excuse. Go ahead and bore us. We can take it and then judge for ourselves the extent of the problem.

Politico reported July 20 that, in contrast, Ackerman is not going to lose his job at Wired for his comments.

“We hired Spencer Ackerman for his well-informed national security reporting and fully support it. Anyone with access to Google can discover his political leanings, as well as his long track record of top-notch opinion journalism from Afghanistan, Iraq, Guantanamo Bay and the Pentagon,” Politico reported a spokesperson for Wired said.