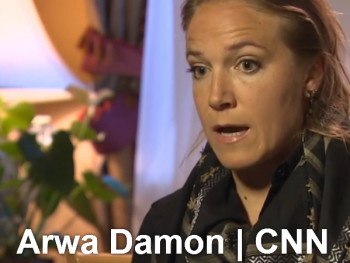 The alleged incident occurred at the U.S. Embassy in Baghdad, where the EMTs, Charles Simon and Tracy Lamar, were working.  During the incident, Damon reportedly claimed she’s a “major reporter for CNN.”

“She was biting them both pretty furiously. She has good teeth,” the lawyer for the EMTs, David Jaroslawicz, told the New York Daily News.

Further, the lawsuit alleges CNN knew Damon “has a history of becoming intoxicated and then abusive.”

But CNN told the Huffington Post “We are not aware of the alleged lawsuit and therefore have no comment.”

The pair’s lawyer told iMediaEthics by e-mail “CNN is being served via the New York Secretary of State in Albany, which is the designated agent for every corporation or LLC licensed to do business in New York.”

The New York Post’s Page Six reported that Damon apologized in an e-mail to U.S. Embassy staff. In the e-mail, she said she didn’t know what happened and that her behavior was both “disastrous” and “unjustified.”

“It’s been an extremely stressful time, I was exhausted, I had not had proper food all day and clearly miscalculated how my body would handle the alcohol consumed … Needless to say, I am utterly mortified and take full responsibility for my actions, which are inexcusable.”

See the e-mail below.

iMediaEthics has asked the State Department and the Department of Justice for comment and verification.

We have also reached out to CNN asking if it has received notification of the lawsuit and for confirmation that the e-mail Page Six published was authentic. Any additional information received will be posted in an update. .