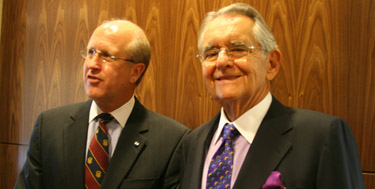 There are two ethical issues behind the reaction to a recent article published through a partnership between the Washington Post and independent content provider the Fiscal Times.

On the one hand, there is reason to question the ethics of partnering with news providers that are funded by a single source; it risks bias. At the same time, regardless of the Washington Post, Fiscal Times partnership, there is also reason to question the ethics of publishing a piece some have argued was unbalanced and lacked an important conflict disclosure, as well as to determine which entity of the partnership should be held responsible for the flawed article.

Commenters seem to be looking for the best way to describe the piece produced by the Fiscal Times and published by the Washington Post on December 31. Headlined ‘Support Grows for Tackling Nation’s Debt,’ it covers “a significant boost to a proposal to appoint a special commission to make the tough decisions that will be required to dig the nation out of debt.” Issues arose over the fact that the piece skewed towards a message some argue reflects too strongly the opinion of Fiscal Times backer Peter G. Peterson, and that the Washington Post did not disclose Peterson’s relationship to sources quoted in the article.

The New York Times writes that sourcing for the article was “awkward.” FAIR, a left-leaning media criticism site, goes so far as to use the term “propaganda,” while the progressive group The Campaign for America’s Future calls the piece “slanted” and “biased.”

In the New York Times coverage of the story, Frank Sesno, director of the School of Media and Public Affairs at the George Washington University, says “I don’t think it’s possible to have organizations where there’s a single source of funding, and not think there’s a point of view… There can be big ethical problems with jobbing out reporting to an organization when there’s a discern-able point of view.”

The Columbia Journalism Review paints the situation more broadly asking “How far should mainstream news outlets go in taking content from news outfits that have a strong point of view? Is it acceptable to take content from some and not others? How should they disclose funders with possible hidden agendas that may be embedded in the stories the public comes to rely on? And is an independently produced story with a point of view different from one produced by a newspaper that may also have strong opinions?”

The Post published a correction disclosing Peterson’s relationship. But, whether or not the relationship between the Washington Post and the Fiscal Times is ethical, one of the two publications is responsible for an article that the CJR, Politico, and “A group of concerned policy scholars and advocates” collected by the Campaign for America’s Future all argue is flawed.

It looks like the Post’s own description of the piece assigns the responsibility for the lapse. The New York Times quotes Marcus W. Brauchli, executive editor of the Washington Post saying “We wouldn’t put anything in the paper that we didn’t believe was independent journalism… We had complete editorial control. Our editors conceived of the story. We asked if The Fiscal Times was interested in producing the story. We edited the story.”

So if the Post was in total control, and they were happy with the story, the question that still remains is, why?

CJR writes that “The story omitted any reference to the considerable opposition from some forty organizations like the NAACP, the SEIU, the AFL-CIO, Common Cause, NOW, and the AARP, and Senate Finance Committee chairman Max Baucus, who isn’t keen on the idea of putting Social Security and Medicare at risk. And while it did admit there is “widespread disagreement on how to respond” to the country’s mounting public debt, readers would have a hard time gleaning from the Post story that the proposed commission faced any resistance at all.”

The Post was quick to defend its independence and editorial control, mitigating the ethical question about its relationship to the Fiscal Times, but in doing that, it makes itself completely editorially responsible for a potentially unethical story.

This seems to imply that, however beneficial, these kinds of content relationships hold an inherent danger to publications; if a story goes wrong, the paper doing the contracting may risk blame no matter who’s responsible for the error or the bias.