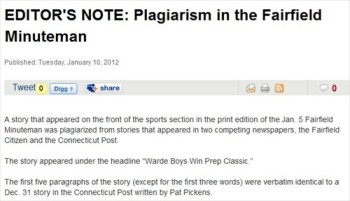 The Fairfield Minuteman published the above editor's note online about the plagiarized story. (Credit: Minutemannewscenter.com, screenshot)

Journal Register owned-The Fairfield Minuteman apologized for publishing a plagiarized story Jan. 5, according to a Jan. 10 blogpost by the Minuteman’s group editor Matt DeRienzo. The Minuteman is a weekly newspaper published in Fairfield, Connecticut, with a circulation of about 20,000 copies, according to Mondo Times.

According to the blog by DeRienzo, the story lifted five “verbatim identical” paragraphs from the Connecticut Post and six “verbatim identical” sentences from the Fairfield Citizen. DeRienzo told iMediaEthics by e-mail that the Fairfield Citizen’s editor let the Minuteman know about the plagiarism.  (The Fairfield Citizen is a twice-weekly Hearst-owned newspaper with a circulation of almost 4,000 copies, according to Mondo Times.  The Connecticut Post is a daily Hearst-owned newspaper with a circulation of about 49,000 copies, according to Mondo Times.)

The Minuteman’s story had one original sentence and a few original words and was by the Minuteman’s sports editor Eric Montgomery, who has since left the newspaper over the incident, DeRienzo wrote.  According to DeRienzo’s blogpost, the story in question only ran in print and with the byline “Staff Reports.”   DeRienzo added in an e-mail to iMediaEthics that the newspaper is “just starting to investigate past work” of Montgomery to see if there are any other stories of concern.

The Minuteman also published the blogpost as a Jan. 11 editor’s note.  We asked Pickins if he was satisfied with the Minuteman’s response. He told iMediaEthics by e-mail:

“I appreciate and respect The Minuteman’s quick, swift and professional response and would expect nothing less from a reputable news organization like the Journal Register Company. I have publicly accepted their apology, and look forward to moving beyond this incident, as I’m sure the JRC is.”

In his blogpost, DeRienzo noted that the plagiarism “is particularly troubling” because “this happened after a colleague was terminated for plagiarism at a sister publication in Connecticut” in October.  In that case, the Middletown Press, which is also owned by the Journal Register, apologized for an Oct. 26 article that plagiarized from Middletown Patch.

We asked DeRienzo what the results of the investigation into Gogolya’s work found. He wrote:

“We found a few cases where portions of wording of his stories were identical or very similar to stories from other news outlets. We were somewhat limited in research, though, because in some cases both news outlets were paraphrasing the same police report or court document. In the instance that led to his dismissal, we examined source documents and both articles and found exact wording and details in his story that was identical to the Patch article but not contained anywhere in the police report.”

iMediaEthics also asked DeRienzo if the two plagiarism incidents will prompt or change any practices or plagiarism safeguards at Journal Register newspapers.  DeRienzo wrote via e-mail:

“After the Oct. 31 incident, we were very public about what happened, and followed up immediately with communication to all staff about how serious this was and what a reminder it was to follow the strictest guidelines about submitting work that is 100% your own and to follow best practices beyond that on attribution and crediting other sources. Steve Buttry, our director of community engagement, followed up with these two blog posts:

“After that, and in-person meetings about it, we were pretty shocked that the incident with Montgomery happened. While we believe it was an isolated incident, one that was pretty hard to believe would have happened, we are indeed planning a newsroom-wide training on this issue to make sure that 100% of staff understand beyond a shadow of a doubt.”