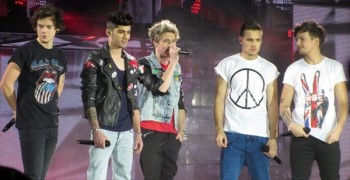 The UK Star falsely claimed in May One Direction’s Harry Styles posted naked pictures of himself online. But, the Star apologized, five months later, because the photos were fake and Styles didn’t post them.

“We said that Harry Styles of One Direction had posted explicit photos of himself online and we published one of them.

“In fact the pictures had been Photoshopped and were fake. They were not posted by Harry Styles and were not pictures of him.

“We apologise to Harry for any embarrassment and distress our article may have caused.”

According to Gossip Cop, which called the photos and story fake at the time, the Star printed the fake nude photo story with the headline “1D Harry X-Rated Sex Pic Shame,” on its front page.  See the original cover:

The Media Blog reported that the article said, “One Direction faced a sex storm last night as parents slammed the band’s increasingly shocking behaviour. An explicit selfie image of Harry Styles, 20, flooded the net, sparking a flood of complaints.”

According to a May story from the Guardian, the Star tried to cover up the error at the time. At first the newspaper used a picture of a shirtless male body identified as Styles, but the paper then changed the story to say that Styles was upset about fake pictures of him naked.

“Later editions of the paper” featured the story “1D HARRY FURY AT FAKED SEX PIC,” the Guardian reported, noting that the story didn’t include the fake nude picture the Star earlier thought was Styles.  See below the new cover.

That article called the picture a “fake sex picture” and quoted an anonymous source “close to the band” saying the photo was clearly fake because a tattoo on the fake picture doesn’t match Styles.

iMediaEthics has written to Styles’ management to ask if he pursued legal action or requested the apology. We’ve also asked the Star for more information. We’ll update with any new information.

iMediaEthics wrote earlier this year when Styles won an injunction  against four unnamed paparazzi who he said were harassing him.