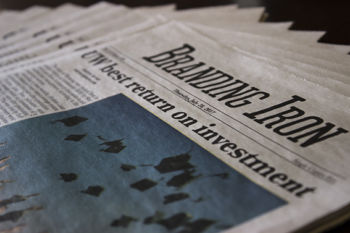 Branding Iron (Credit: U of Wyoming)

The Branding Iron, the student newspaper for the University of Wyoming, published a story that featured fake quotes and plagiarized material. In a Nov. 3 retraction, the paper disclosed the major ethical fails in the  Oct. 27 article, “Equifax security attack,” fired the reporter who wrote it and plans to re-train its entire staff.

The article’s link now goes to an error page. According to the retraction, the article quoted a person named Cole Ehmke and identified him as an Equifax employee. But not only does Ehmke not work for Equifax, the quotes were faked. Further, “the information found in the article came from other publications rather than as a product of independent research and interviews,” the retraction states.

iMediaEthics has contacted The Branding Iron to ask how it learned about the problems with the story, what outlets the article plagiarized from, and if it has reviewed all of the reporter’s previous work.

Last month, the student newspaper for Virginia’s Longwood University, The Rotunda, revealed there were accusations of fake quotes in a news article. The reporter quit in that case, as iMediaEthics reported.