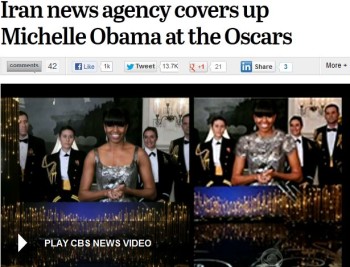 See above a side-by-side comparison. On the left, Michelle Obama at the Oscars, before Photoshop. On the right, Fars News Agency's Photoshopped version of the first lady at the Oscars. (Credit: CBS News, screenshot)

The actual photograph showed the first lady wearing a sparkling, sleeveless dress to present via satellite the award for Best Picture at Sunday night’s Oscars ceremony.

But, when Fars News Agency showed Mrs. Obama, it doctored the image to cover her up more, adding short sleeves to her dress and making her neckline higher. Check the image out above and see the Fars article.  A Google Translate provides a rough English version of the Fars article, which doesn’t appear to indicate or disclose that the Obama picture was doctored.

According to Politico, Persian Letters first spotted the Photoshop.

Fars News Agency is the same outlet that apologized last year after re-publishing a satirical story from The Onion without credit.  The Onion story was titled “Gallup Poll: Rural Whites Prefer Ahmadinejad to Obama.”  Fars said in its apology that it took the phony post down within two hours but maintained that the poll could be real because:

“We do believe that if a free opinion poll is conducted in the US, a majority of Americans would prefer anyone outside the US political system to President Barack Obama and American statesmen.”

Iran and Photoshop were in the news earlier this month, as iMediaEthics wrote about claims that Iran news site Khouz News published a doctored photo of a fighter jet in the air.

“This isn’t the first time images produced by Western companies have been photoshopped to comply with the conservative culture of Muslim governments. Last October, Ikea apologized for removing pictures of women in its furniture catalog distributed in Saudi Arabia.”

In 2011, two Hasidic outlets — Der Tzitung and Dee Voch — made the news for doctoring a White House-released photo of the Situation Room during the Osama bin Laden raid.  In that case, both outlets Photoshopped the image to remove two women pictured, Hillary Clinton and Audrey Tomason, for “modesty” reasons.

iMediaEthics has written to Fars News Agency for more information about its decision to Photoshop and will update with any response.

iMediaEthics wrote yesterday when The Onion apologized to 9-year-old Oscars nominee Quvenzhane Wallis for a “crude and offensive” tweet calling her the “c-word.”