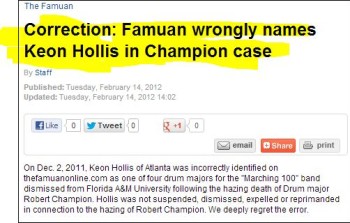 The Famuan posted the above correction but was still sued for libel (Credit: Famuan, screenshot, highlight added)

And even though The Famuan, the university’s student newspaper, corrected the error made in a December 2011 story, the student, Keon Hollis, still sued because “the correction was a whisper of innocence that could never overcome the initial shout of guilty,” his attorney Lin Wood told iMediaEthics.  Wood expained in an email:

“The initial false online article conveyed to readers that Keon was a participant in the hazing that resulted in the death of his friend. Before the article was corrected, it was republished and discussed on the Internet numerous times.”

The article has since been unpublished, and a correction has been published online reading:

“On Dec. 2, 2011, Keon Hollis of Atlanta was incorrectly identified on thefamuanonline.com as one of four drum majors for the ‘Marching 100’ band dismissed from Florida A&M University following the hazing death of Drum major Robert Champion. Hollis was not suspended, dismissed, expelled or reprimanded in connection to the hazing of Robert Champion. We deeply regret the error.”

Changes at The Famuan

After the libel lawsuit was filed, there were several changes made at The Famuan, including a temporary suspension “from publishing,” journalism training for staff, and a change of adviser.

FAMU Journalim School dean, Ann Kimbrough, told iMediaEthics the temporary suspension was in effect for the month of January and indicated it was related to money problems.  She wrote:

“The administration postponed the publishing of the first issue until the training and other processes were completed. The Famuan published its first issue on January 30. There are financial strains.”

Before responding to iMediaEthics’ inquiry, Kimbrough noted that because of the pending litigation, she had to “coordinate all responses with our attorney.”

She declined to comment on the libel lawsuit or any new measures at The Famuan because of the libel lawsuit because “this is an active legal matter.” But, she did note in an email to iMediaEthics that the newspaper’s staff had to get “training in areas including ethics, media sales, newspaper management, layout and design, copyediting, etc.”

In addition, The Famuan‘s staff when the newspaper’s publication was suspended was “told they must reapply for their positions,” and the paper’s adviser was changed, SPLC explained.  But, Kimbrough reportedly commented that the change of advisers was not due to the libel lawsuit, commenting that adviser Andrew Skerritt’s “removal was already to be.” In terms of the staff, when the staff was re-hired, the editor who had been hired in December to run the newspaper for the spring semester, Karl Etters, wasn’t re-hired and instead another student, Angela Meus, got the job.

According to a Student Press Law Center report, Etters said he was told he wasn’t re-hired because he “didn’t fit into the vision of the paper” and that Kanya Stewart, one of the two new advisers, “didn’t like my answer about negative stories” in response to his comment “along the lines of ‘we publish the truth whether it’s positive or negative.'”

iMediaEthics asked Kimbrough if Etters’ account of events was accurate and if that was the reason he wasn’t chosen to be editor.  But Kimbrough didn’t directly answer our question, instead writing:

iMediaEthics originally sent our questions to those current journalism advisers, but were told by Horton that all questions had to go through Kimbrough.

Hollis, the student suing The Famuan, also sued Orlando ABC-affiliate WFTV for its Dec. 5, 2011 story “FAMU student leaders call for an end to hazing.” According to Courthouse News Service, Hollis’s lawsuit indicated WFTV also wrongly reported he was disciplined in relation to the hazing based on The Famuan’s story.  Courthouse News Service explained:

“Hollis says the article attributed its statements about him to FAMU’s student newspaper, The Famuan, which mistakenly identified Hollis as one of four students who had been expelled after Champion’s death.  He claims The Famuan removed his name from the original article before WFTV and Cox Media published their piece, but the defendants failed to remove the false and defamatory statements.  After Hollis demanded a retraction, WFTV and Cox Media updated the article, stating that Hollis had not been suspended, but he says they failed to mention that Hollis had not contributed to Champion’s death.”

Wood, the attorney who also represented Hollis in his lawsuit against WFTV told iMediaEthics that “The WTFV matter has settled. The FAMUAN lawsuit has been set for mediation by agreement of the parties.” WFTV News Director Matt Parcell confirmed the settlement, telling iMediaEthics by email:  “The matter has been settled and we have no further comment.”

A search of WFTV’s website of “Keon Hollis” didn’t produce any apparent corrections, apologies or retractions related to Hollis.