Forbes Published Fake Photo of Queen Elizabeth at US Open 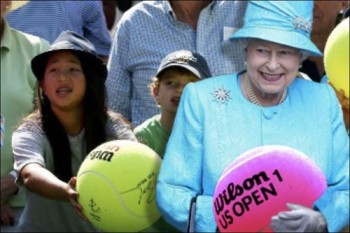 Was the Queen at the US Open playing with big balls? Forbes' photo implies she might have been. (Credit: screenshot Forbes.com)

Days after a huge tennis victory for the British Isles, Forbes published an article titled “What Would US Open Tickets Cost If An American Man Didn’t Win For 77 Years?“. In the article, Forbes contributor Jesse Lawrence mentioned that Queen Elizabeth “has only attended Wimbledon four times since 1957, the last time to watch Murray play in 2010.”

In the middle of the article a picture of Queen Elizabeth appears dressed in a bright blue suit holding a novelty size hot pink US Open tennis ball and surrounded by grubby and casually dressed commoners.

On close inspection the photo manipulation is obvious:

Forbes fake photograph of Queen Elizabeth at US Open with iMediaEthics’ annotations that highlight sites of the Photoshop image manipulations. There is no disclosure that this is a “photo illustration” or “photo composite.”   (Credit: screenshot Forbes.com with comments added)

The photo contains no disclosure that it is a composite nor is there a credit to the photographer/graphic artist who created the image. Any “photo illustration” or “photo composite” should be properly labeled as such according to photojournalism standards.

Too much effort was put into creating this image — such as the drop shadow and the children who are also holding large balls — to argue that it is obvious it is a composite image.

But that is how Forbes is trying to defend itself.  Christina Vega from Forbes Media Corporate Communications told iMediaEthics by email that:

“Our readers recognize that the image is a composite.  When composite images could be mistaken for actual images, we disclose that the image has been modified.  But, in cases like this one, where it is readily apparent that the image was modified, in our view no caption is necessary.”

New York Post labels most of its photo illustrations as “Post photo composite”–even the exaggerated ones, as shown above. (Credit: NYPost, scan, highlight added)

If Forbes had no intention of fooling their readers, then why did they put so much effort into making the image appear real? Notice the queen’s faked shadow precisely follows her outline like a real shadow would. If Forbes‘ intent was to make an obvious fake, why would they go to the effort of making a hat-shaped shadow that could appear real?

Even the tabloid New York Post discloses their obvious photo composites. Although not always.

No one is arguing this was well done. The Photoshop skills are amateur at best. The bad Photoshop technique may not fool most people but it would more than likely fool some.

Lawrence also made an error in his article and wrote that Murray is the “first British champion since Fred Perry in 1936.”

This language has been hotly criticized over the past 24 hours because as Chloe Angyal, the editor of Feministing, a blog for young feminists, put it in a tweet “Murray is indeed the first Brit to win Wimbledon in 77 years unless you think women are people.”

In 1977, Virginia Wade, a Brit, won Wimbledon a mere 36 years ago. Does she not count because she is a woman?

Forbes is not alone in this error. People Magazine went with the title “Andy Murray: What to Know About First British Wimbledon Champ in 77 Years” and USA Today went with “Andy Murray wins Wimbledon, ends 77-year British drought.”

There are countless others. Slate.com even issued a correction:

“Correction, July 8, 2013: This post originally stated that Andy Murray was the first Brit to win Wimbledon in 77 years. While Murray is the first British man to win the title in 77 years, Virginia Wade won the women’s singles title in 1977.“

The Associated Press managed to get it correct with their July 7th article Murray becomes first British man to win Wimbledon singles since 1936.

Further controversy surrounding this year’s Wimbledon tournament news coverage include the New York Times tweeting their headline “After 77 Years, Murray and England Rule” to which the twitterverse responded with cries that the Times invest in an atlas as Murray is Scottish not English.

“I just wonder if her dad, because he has obviously been the most influential person in her life, did say to her when she was 12, 13, 14 maybe, ‘listen, you are never going to be, you know, a looker.”

Inverdale’s sexist comment led to a backlash of criticism for focusing on Bartoli’s looks instead of her skill as a tennis player. Inverdale seemed to be saying that Bartoli is a great tennis player because she is ugly. The BBC and Inverdale have apologized.