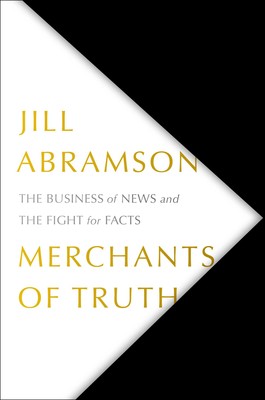 Jill Abramson, the former New York Times executive editor, has been accused of plagiarism a in her new book Merchants of Truth: The Business of News and the Fight for Facts.

Vice‘s Michael Moynihan tweeted yesterday that “*all three* chapters on Vice were clotted with mistakes. Lots of them. The truth promised in Merchants of Truth was often not true. While trying to corroborate certain claims, I noticed that it also contained … plagiarized passages.”

Moynihan included side-by-side comparisons of sections of Abramson’s book with excerpts from news outlets including the Ryerson Review of Journalism, Time Out magazine, a masters thesis, the New Yorker, and the Columbia Journalism Review.

In an interview with Fox News, Abramson said “I certainly didn’t plagiarize my book,” according to the Huffington Post. She suggested Vice just didn’t “like the portrayal of Vice.”

Abramson tweeted that she “endeavored to accurately and properly give attribution to the hundreds of sources that were part of my research,” but that she will “review the passages in question.”

iMediaEthics has written to Abramson and her publisher Simon & Schuster. One example Moynihan flagged:

Ryerson Review of Journalism: “In August 2003, McInnes wrote a column in The American Conservative, a magazine run by Pat Buchanan. In the magazine, he called young people a bunch of knee-jerk liberals (a phrase McInnes and his cronies use often) who’ll believe anyone with dark skin over anyone with light skin. He laments the liberal views of most of the people who pick up his magazine, saying they’re ‘brainwashed by communist propaganda.'”

Abramson’s book: “He wrote a column in The American Conservative, a magazine run by Pat Buchanan, calling young people a bunch of knee-jerk liberals (a phrase McInnes and his ilk often used) who would believe anyone with dark skin over anyone with light skin. He lamented the liberal views of his magazine’s readers, saying they were ‘brainwashed by communist propaganda.'”