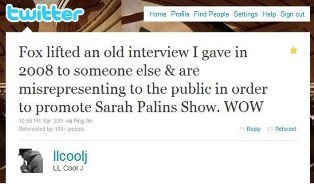 LL Cool J turned to Twitter to complain about Fox News' recycling of a 2008 interview with him for Sarah Palin's new show.

Fox News Channel’s promotional clips for Sarah Palin’s new show, Real American Stories, have left the channel with a lot of questions from the media, the public and the celebrities who were advertised to be on the show.

Actor and rapper LL Cool J, country singer Toby Keith and former GE CEO Jack Welch were all featured as celebrities whose “Real American Stories” will appear in the first show.  Well, that is, until LL Cool J (James Todd Smith) called Fox News out on recycling an old interview with him for the supposed new show.

“Fox lifted an old interview I gave in 2008 to someone else & are misrepresenting to the public in order to promote Sarah Palins Show. WOW”

The New York Times blogged that Toby Keith’s publicist, Elaine Schock, is also surprised that Keith is to be featured on Palin’s show, as Keith has never been interviewed by Palin.  The New York Times reported Schock said in a telephone interview, “I have no idea what interview they are using. Toby’s talked to Fox a number of times, and I had no idea that this was going to be on Sarah Palin’s special. Fox has never contacted me — not now, not when they were putting this together, not at all. I have no idea what they’re using.”

The New York Times reported Fox News said the program did e-mail Schock to let her know the interview would run on Real American Stories, but Schock said she has not received any such e-mail.

The New York Times blog continued that “several accounts of the special reported that Ms. Palin herself would be talking to the guests in the show. One of these, on the Fox Nation website, which is owned by Fox News, reprinted an account from the website The Hill, which said: ‘Sarah Palin will kick off her new Fox News series with one of the most diverse guest lineups in memory: LL Cool J, Toby Keith, and Jack Welch. The three very different guests will speak to Palin for her inaugural episode of ‘American Stories ‘ on April 1st.’ ”

The Washington Post reported that Fox News wrote in a statement that it “did not commit to restrictions on its interview with Mr. Smith so therefore the network did not need his permission to use the interview in this program.”

But after LL Cool J tweeted (spoke out?) against the interview, Fox News pulled his clips from the interview and show and issued a statement, as the New York Daily News reported:

“‘Real American Stories’ features uplifting tales about overcoming adversity and we believe Mr. Smith’s interview fit that criteria,” FNC head of programming Bill Shine said in a statement. ‘However, as it appears that Mr. Smith does not want to be associated with a program that could serve as an inspiration to others, we are cutting his interview from the special and wish him the best with his fledgling acting career.’ “

But, is it OK for Fox News to have promoted the interviews as new material?

It seems like all of the promotion skimmed over the fact that at least two of the three big name interviews were old news–and the celebs did not agree to appear on Palin’s show.  And, even if a news organization has the right to reuse a clip, does the lack of disclosure about the clip’s original purpose and context, make it unethical?