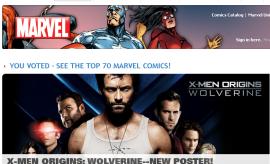 If you report news, watch your back--and your employer's partners financial interests--or you could get fired. A FOX News critic becomes an ex-man for his review of an unauthorized preview of 20th Century Fox's forthcoming Ex-Men movie. "X-Men Origins: Wolverine" was not to be released until May 1st but was, according to bloggers, leaked on the Internet and created lots of buzz.

So why was the critic axed for giving FOX readers news from the Internet? Aren’t intrepid reporters held near and dear by news networks? The answer, in this case, seems to be no because FOX News and 20th Century Fox are both owned by Murdock’s News Corp and have a shared financial interest.

Steven Musil, CNet News, wrote: “Friedman, who had had contributed to FoxNews.com for 10 years, wrote Thursday in his Fox 411 column that downloading the unreleased superhero movie from the Internet was ‘so much easier than going out in the rain’ and that it ‘exceeds expectations at every turn,’ according to a report in Nikki Finke’s Deadline Hollywood Daily.”

Fox said, according to Finke (emphasis mine): ” ‘ We’ve just been made aware that Roger Friedman, a freelance columnist who writes Fox 411 on Foxnews.com – an entirely separate company from 20th Century Fox — watched on the Internet and reviewed a stolen and unfinished version of X-Men Origins: Wolverine. This behavior is reprehensible and we condemn this act categorically — whether the review is good or bad.’ “

Is Fox News Channel  really “an entirely separate company from 20th Century Fox ?” Not true, if you believe the Columbia Journalism Review’s helpful guide titled: “Who Owns What.” Indeed, both Fox News and 20th Century Fox are listed as “holdings” of Murdock’s News Corp.

Why would FOX News falsely claim no formal corporate ties or interests exist between FOX News and 20th Century Fox? Maybe they wanted to cover their embarrassing tracks –that they chose to back their business partner’s financial interests instead of their duty-bound news interests?

Bottom line: Fox News made their 10 year veteran an ex-man for reporting news about their partner’s x-Men movie.