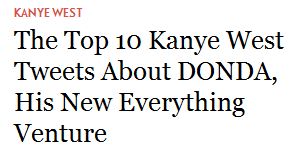 Gawker’s Seth Abramovitch was fired Jan. 5 after his blogpost about rapper Kanye West’s tweets, the New York Observer reported. Abramovitch’s Jan. 5 post (see here) included the “n-word,” which Gawker has since struck through and added a footnote with an apology.  The footnote apology reads in part:

“So sorry, to everyone who was offended, and for the confusion. Sorries all around!”

According to the New York Observer, Gawker’s editor A.J. Daulerio confirmed that Abramovitch was fired.

UPDATE: 1/12/2012 12:21 PM EST: Read here Gawker editor A.J. Daulerio’s Jan. 11 post in which he says Abramovitch wasn’t fired “specifically” for the Kanye West post.  “I’d like to reiterate here that there were other facts before and after” the Kanye West story “which led to” the firing, Daulerio wrote. (Via MediaBistro)