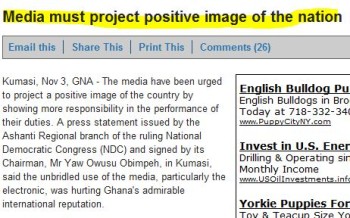 Ghana News Agency reported Nov. 3. that the government “urged” the media “to project a positive image of the country by showing more responsibility in the performance of their duties.”

The request came in a press release from the ruling National Democratic Congress’s Ashanti Regional Branch and as a result of a much reported alleged robbery and mass rape.