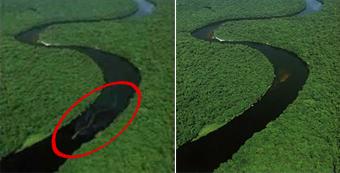 Photo on the left was created by adding a snake via photoshop to the original image on the right. London Shearer Allen, StinkyJournalism reporter, noted that the "monster" was approximately 30 tree widths in length. Conservatively estimating tree widths as 15 feet across, makes the snake monster more than 100 feet in length as was reported. Do the math. This photo represents a snake that would measure at least 450 feet long!

What’s a blogger to do when he or she suspects that a doctored photo is circulating the Internet?

Take the case of the recent giant snake that was supposedly photographed in the rivers of Borneo.

FOX News, The Guardian even UPI all did reports. Their text suggested that the giant snake photos might be legitimate–even though a quick count of the trees show the impossible scale of the beast. London Shearer Allen, iMediaEthics.org reporter, noted that the “monster” was approximately “30 tree-widths long.”

Conservatively estimating tree widths as 15 feet across makes the snake monster far longer than the reported 100 feet in length. Do the math. The photo above represents a snake that would measure at least 450 feet long!  A savvy blogger, Nuno of NunoXEI.com, however, soon discovered the original picture the hoaxer used for creating the photoshopped image.

During his investigation, he found an excellent detective’s tool– TinEye.com– that helped him discover abundant examples of the same stock photo used by the hoaxer to create his fauxtograph.

Here’s how it works, according to the site’s FAQ:

“When you submit an image to be searched, TinEye creates a unique and compact digital signature or ‘fingerprint’ for it, then compares this fingerprint to every other image in our index to retrieve matches. TinEye can even find a partial fingerprint match. TinEye does not typically find similar images (i.e. a different image with the same subject matter); it finds exact matches including those that have been cropped, edited or re-sized.”

In other words, after a user uploads an image, the site finds exact or close matches to an image and – viola! – you can learn if a questionable image is actually a product of photoshop as judged by the additions or subtractions.

In his blog, Nuno explains that at first he had a hard time finding the original image because it isn’t even from the same region.

“The image used isn’t even the Borneo… it’s in the Congo region of Africa. After a couple different searches for images of the Borneo river only turned up muddy waters. I typed ‘rainforest logging’ into Google and luckily got it on the second page,” he wrote. “That led me to type the CORRECT location of the photo in Google image search: ‘rainforest logging Congo’.” His Google Image search took awhile, whereas TinEye turned out to be much faster. “The end of the tale is that I discovered a site called TinEye that ended up confirming the whole darn thing much quicker,” he wrote.

Shouldn’t directors of photography for UPI, FOX News and The Guardian start using TinEye before publishing fakes? It is important to note that mainstream media continue publishing the monster river snake stories without update, correction–or shame. As Nuno says,

“Reading that ‘critics are concerned’ that this photo is a fake or that ‘socially responsible groups’ are demanding an increase to public awareness regarding the threat [of a monster] is ABSURD!”

The media need to do better vetting of photos before they publish them if they want to maintain the public’s trust. TinEye is a great tool for both bloggers and media directors of photography. Hopefully, mainstream media will start to use it instead of circulating more fake monster photos. It should be noted that Boing Boing gave credit to Fromage for discovering the source image used for the hoax on Feb 26. However, Nuno posted his discovery on the 25th, a day before. iMediaEthics notified Nuno and Boing Boing that the wrong person seems to be getting credit for Nuno’s work and are waiting for comment.