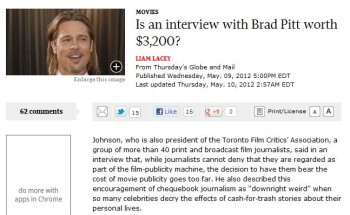 Canadian journalists who wanted to interview celebrities like Brad Pitt, Kristen Stewart and Nicole Kidman at the Cannes Film Festival press junkets for movies Killing Them Softly and On the Road were told they could, for a cost, Der Spiegel wrote.

“It is the first time in Cannes history that journalists have been charged fees in exchange for interviews with Hollywood celebrities,” according to Der Spiegel.  The payment is to offset “the massive costs” of going to the Cannes Film Festival, which is currently being held from May 16 to May 27.  Ordinarily, film distributors pay “for access” but “in this case, the company decided to pass those costs on to journalists,” according to Der Spiegel.

According to Deadline, Alliance Films is a Canadian company and said it “decided not to partake in the Cannes junkets for Killing Them Softly and On the Road, however we wanted to provide Canadian journalists the opportunity to participate directly if they so choose.”  Maclean‘s reported that Alliance Films’ vice president of publicity and promotions Carmite Cohen defended the payments saying “we are not selling interview slots.”

Cohen challenged Maclean‘s original blogpost on the payments, according to a follow-up post. (In that second story, Maclean‘s Brian Johnson said he found “absolutely no evidence” of her claims the post was “inaccurate and distorts the truth” but included her follow-up comments.)

The Globe and Mail noted that Alliance Films wasn’t keen on Maclean’s publishing its original blogpost about the paid interviews, writing :

“When Maclean’s film critic Brian D. Johnson published the interview-fee menu on his online blog last week, Alliance contacted him and insisted that he remove it as a breach of confidentiality. Maclean’s legal advisers disagreed, noting that Alliance’s vice-president of publicity and promotions publicist, Carmite Cohen, had spoken on the record.”

In the second post, Cohen added that Alliance Films gets “absolutely no economic benefit” from the payments for celebrity interviews and that the company just “decided not to contribute to the costs of the Cannes junket” by paying itself “for access to those junkets” in Cannes.  Instead, she wrote “we didn’t want to prevent Canadian journalists from having access to the Cannes junkets for these films if they wanted to participate and gain earlier access.  It was on this basis that you were provided with the price list. ”

“Although publicists for local film distributors have made noises about having to pay interview fees for selected journalists in recent years, the cost has never before been charged to the media outlets….With junkets, studios pay the cost of some journalists’ travel and accommodation. In exchange, their publicists can establish interview conditions, including requiring the writers to speak to everyone in a film whether they want to or not and to agree to restrictions on certain questions.”

Maclean‘s noted “paying for interviews is something most news organizations, including Maclean‘s, will not do.” Further, Deadline added that the Globe and Mail and the National Post both said they “will not pay for, nor participate in, the interviews.”

We have written to Alliance Films’ Cohen for more information and will update with any response.

UPDATE: 5/23/2012 9:10 AM EST:  We asked Alliance Films what the alleged inaccuracies were in the Maclean’s post, why the company reportedly wanted that post taken down, what if any restrictions were on the paid interviews, how many journalists signed up for the paid interviews, and where the money went to.   A spokesperson for the company sent us this statement:

“It is normal practice for any sales agent / producer / distributor organizing an international press junket to request other participating distributors to share in the hard costs of the junket (flights, hotels, etc.).  In this particular case, Alliance decided not to participate in the junket in Cannes and wait until the North American junket later in the year, where Alliance will contribute to the junket costs, as it has always done, so that Canadian media can attend.  Having made this decision, we felt it only fair to alert Canadian journalists so that they could choose to participate directly if they so wished, independent of Alliance.  We informed them of the costs that we would be required to bear for that participation.  We stress that the costs of such participation would not have come to Alliance nor talent but directly to the organizing distributor. Any implication that this is a revenue source for Alliance is wholly inaccurate.”

We’ve sent the questions that weren’t answered by the statement again and will update with any response.

UPDATE: 5/23/2012 9:55 AM EST: Concerning out remaining questions, Alliance told us “The sales agent / producer / distributor organizing the junket would have that information – not Alliance. They only alerted Canadian journalists so that they could choose to participate directly if they so wished.”