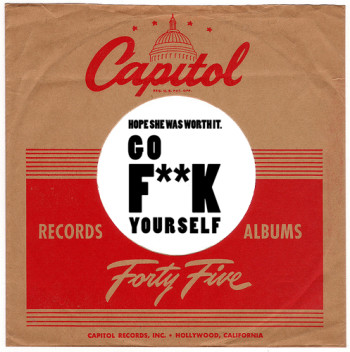 Penn State student newspaper The Daily Collegian’s much-talked about “Go F**K Yourself” ad from a scorned girl to her ex was a hoax, College Media Matters’ Dan Reimold reported.

The full-page ad said: “Dear J, Hope She Was Worth It. Go F**K Yourself xo, C GOFOCKURSELF.TUMBLR.COM”

Penn State’s Darian Somers tweeted a photo of the ad.

Damn, someone took a full page out in @DailyCollegian to call out an ex. pic.twitter.com/jv97rCVheZ

While many readers thought the ad was a real person calling out her ex-boyfriend in the student newspaper, it turned out the whole thing was part of a viral marketing campaign. The campaign is to promote a new song, “Go F**k Yourself,” by Capitol Music Group band My Crazy Girlfriend.

Students were tricked by the ad, including the who posted the ad on Reddit yesterday. Readers seemed to general not know the ad was a viral marketing stunt.

Duped, the Redditor wrote: “A girl at my college got an entire page in our newspaper to advertise her tumblr hating on her cheating ex.”

More than 350 people have commented on the Reddit post, many of whom figured out the ad was a marketing ploy and not an actual student.

iMediaEthics went to the Tumblr account listed in the ad.

The Tumblr page associated with the ad further tricks readers as it doesn’t indicate it’s an ad, but instead appears only to be written from the same girl, angry at her ex for cheating, who posted the ad.  The “about us” for the Tumblr account reads: “i gave everything to you. and here’s my way of taking it back.”

Posts are elaborate and include gifs, screenshots of texts between “J Babyyy” and the Tumblr account owner.”

One of the posts promotes the “Go F**k Yourself” song, calling  it “my f**king jam.”

Below is the (uncensored) video for the song:

The Daily Collegian’s business manager Anjali Krishnan, who went along and approved the deceit, told The Daily Dot she “had to approve [the ad] because it was kind of controversial.” iMediaEthics has asked the Daily Collegian what this means.

“It was weird because we got a call for the same ad awhile ago, but from a national agency. But when I tried to ask what it was for, they dropped it. Then we got contacted again by Capitol Music Group and it was for this. They also said they wanted to keep it confidential until [the ad] ran.”

iMediaEthics has asked My Crazy Girlfriend if the ad was placed in other college newspapers or just the Daily Collegian. We’ve also asked the Daily Collegian for more information about its decision to publish the ad We’ll update with any response.