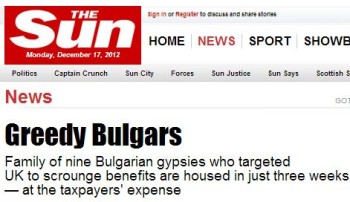 The headline accompanied a Sept. 11 Sun story reporting on a “family of nine Bulgarian gypsies who targeted UK to scrounge benefits are housed in just three weeks — at the taxpayers’ expense.”  The article was already cited by the PCC for inaccuracy, as iMediaEthics wrote last month.   Also, iMediaEthics noted at the time that the article had questionable sourcing and we received a complaint about bias in the story.  And buried in the PCC’s complaint report is a note that the PCC received a complaint about discrimination in the article.

iMediaEthics looked deeper into the article and found that the article itself suggests a negative view of the family because it presents them as intentionally taking “advantage” of Britain’s benefits in lieu of staying in Bulgaria. The Sun highlights their ethnicity with the “Greedy Bulgars” headline and reports critically on the family, commenting they live in “squalid conditions, littered with dirty nappies.”

The family is the focus of the story, and yet none of the information about them is attributed to any of them and the article doesn’t disclose any direct attempts to get the family’s side of the story.  For example, the article reports that “the family have now been handed a home after lodging a claim for asylum,” and that the father “told pals he was here to take advantage of the soft welfare system.”

Further, the only information about the family attributed to anyone is an unnamed “fellow Bulgarian,” who is quoted as saying the family came to England because “They heard about the benefits” and the family doesn’t want to go back because “In Bulgaria they can’t get these benefits.”

The Sun took its article a step further, into the zone of harassment, apparently trying to track this family, by posting a note at the bottom of the article calling for readers to call or email the newspaper if the family has “moved in near you.”

iMediaEthics asked the Sun‘s ombudsman, Philippa Kennedy, about the article, the claims of bias and its problematic sourcing, but she denied that the article showed a “negatively biased view of Bulgarians.”

“The headline was meant to be an admittedly humorous play on the expression ‘Greedy Beggars’ but was never meant to be an attack on a particular ethnicity,” she wrote.  Curiously, she didn’t see anything wrong with describing the Bulgarian family as greedy in their play on words.

But, the Bulgarian Embassy in London didn’t find it as “humorous” as Kennedy did. The embassy’s Political Section attache Tsvetin Spasov told iMediaEthics that it doesn’t find the headline “humorous,” but instead sees “an element which implies ethnic prejudice which is unacceptable to us.” Spasov suggested that the embassy’s comments to iMediaEthics about the reporting are rare, noting that:

“The Embassy makes thorough consultations of the necessity for a comment to any article which involves Bulgarians residing in the UK.”

Kennedy, who tried to stave off criticism, attempted to deflect our questions about bias and sourcing into her own criticism of iMediaEthics:

“I take it, from the tone of your questions, that you have already made up your mind on the slant of your article.”

“The article was not a ‘negatively biased view of Bulgarians’ as you suggest but a story about the abuse of the UK benefits system.  The fact that the family was from Bulgaria was incidental.  If they had been from somewhere in the UK it would have been treated in the same way.

“You mention Mariana Sabeva, whose name does not appear in the story, so it seems clear that you have had contact with the family or their representative.  It would be disappointing if you formed an opinion on the basis of a complaint from another source.”

But the Sun ombudsman is obviously confused in her efforts to defend the undefendable.  As we pointed out to her in our response, Sabeva, the mother of the family, IS mentioned by name in their story.

And, given that Sabeva and her family are the subject of the Sun’s report, and no response from the family is clearly included in the article, any complaint from them should be considered in fair and ethical reporting of this family under attack, in iMediaEthics’ opinion.

Kennedy added that “The Sun’s readership is particularly concerned about benefits abuse and it comes high up on the list in market research polls.”

Maybe this is the problem with reporting based on polls? Financial abuses may come up higher in their reader polls, but to do reports about such abuses and hook them to use ethnic attacks is, according to iMediaEthics and the embassy, unacceptable.

She continued: “It would be disappointing if you as a reporter, chose to interpret the story as an attack on Bulgarians in general.”

That the family is Bulgarian and a comparison of Bulgaria to the UK is central to the story.  The article fear mongers as the unidentified “fellow Bulgarian” says that “In Bulgaria they can’t get these benefits. More and more people are going to do this.”

Kennedy suggested that the unnamed “fellow Bulgarian” was the family’s spokesperson.

“Clearly there was a communication problem but the family sent over an English speaking friend to speak to the reporter and photographer and the information can be sourced to that person.”

If true, why wasn’t that included in the article?

The Press Complaints Commission’s Catherine Speller told iMediaEthics that “The PCC received three complaints (including the one from the Migrants Resource Centre, on behalf of Mr Salvatore Quero) about the article you mention in The Sun. The PCC took the matter forward with Mr Quero as the subject of the complaint; the other two complaints were not pursued.” When asked why the PCC didn’t address the discrimination complaint in its resolution report, Speller wrote:

“The wording of the resolution statement was agreed with the complainant as a suitable outcome to his complaint, and provides the public record of the case.”

PCC Director of Communications Jonathan Collett added that the other complaints were also about “accuracy (clause 1) and discrimination (clause 12).” Collett explained further why the PCC handled Quero’s complaints over the other two, writing:

“Whenever the Commission receives multiple complaints about a single issue, it will select a lead correspondent to investigate the matter (if appropriate). In a case like this, in which the material directly concerned an individual who has elected to complain, naturally that individual would be selected as the lead complainant.”

In a follow-up email, iMediaEthics asked Kennedy if the Sun tried to interview the family, who this unnamed person is, why the Sun described the family as “gypsies,” and, if that person was a family spokesperson, why he/she wasn’t identified as such, how many complaints in total the Sun received over the article, and to see the aforementioned market research polls. Kennedy did not respond to our follow-up emails.

iMediaEthics has also written to the Migrants Resource Centre asking about its complaint to the PCC and any involvement with the family in question. We’ve also contacted the Westminster City Council for comment on the story and seeking the family’s response to the story. We’ll update with any responses.