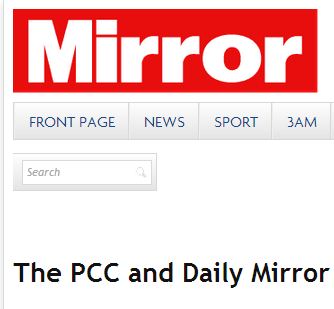 The UK Daily Mirror was fined £1,200 after breaking the UK Sexual Offences Act 1992 with its 2011 story naming a sexual assault victim, the Guardian reported.  According to the Press Gazette, the Mirror’s story was about the court date for the person who was accused of the assault.

“The press must not identify victims of sexual assault or publish material likely to contribute to such identification unless there is adequate justification and they are legally free to do so.”

In 2011, the PCC also released “new guidance to editors on the reporting of court cases involving sexual offenses,” reminding editors to be careful to not figure out who victims are because of “jigsaw identification,” which is when people can deduce who the victim is through information provided in reports.

While commenting that the Mirror “acted properly” by owning up to its error, the PCC called the code violation “an alarming case” and noted that it “upheld the complaint without hesitation.”

According to the PCC ruling on the complaint filed by Cleveland police, which was also published on the Mirror’s website, the Mirror acknowledged that “it was at fault” and privately apologized to the victim.

In response to the error in naming the victim, the PCC reported that the Mirror “said it had launched a thorough investigation into how the complainant’s name came to be published and intended to improve its training of its journalist to prevent such breaches in future.”

For example, according to the PCC’s report, the Mirror said it had the reporter responsible for the story “had undertaken training on the relevant legal requirements and the importance of maintaining the anonymity of victims in such cases.”  But, a commenter on the Press Gazette‘s story on the PCC ruling, “robinyoung1” raised questions about that announcement:

“If the reporter concerned is to receive legal training as a result of this error, what about the sub-editor, revise sub,chief sub and editor/deputy editor who presumably missed it? Doesn’t this underline the dangers of doing away with traditional editorial safeguards as misguided cost-cutting measures?”

iMediaEthics has written to the Mirror asking:

An email has also been sent to the PCC seeking more specifics on the investigation and training the Mirror reported having to the PCC because of this incident. We’ll update with any responses.

iMediaEthics wrote earlier this week about Thai newspaper the Daily News’ decision to publish the name and photo identification of a rape victim.  The Daily News unpublished the identifying information.

“The adjudication relates to an article published in the print edition of the Daily Mirror. It was not published online.

“The PCC’s standard protocol is not to comment beyond what is published in the adjudication. Under the system of self-regulation administered by the Press Complaints Commission, the editor is ultimately responsible for the content of the newspaper or magazine in question.”