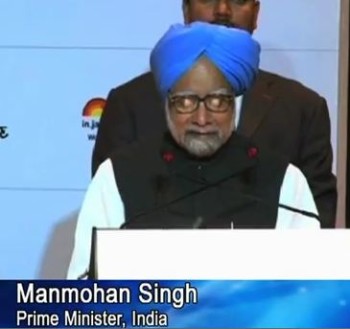 According to MoneyControl, Prime Minister Manmohan Singh noted he wasn’t calling for government interference in the media or limited press freedom. Singh is quoted as saying:

“In my opinion, there is a general consensus in our country that no outside control should be imposed over the media.”

India’s vice president, M. Hamid Ansari, similarly called for Indian journalism to avoid being “tained by sensationalism so often displayed by the electronic media,” according to the Hindu’s Dec. 31 article. Ansari’s comments were made during the World Urdu Editors Conference.  He also advised journalists differentiate “between journalism, public relations, advertising and entertainment.”

Singh described the Indian press as “independent and alive,” and commented that “Indian media will itself take steps to wipe out” ethical issues like the country’s “paid news problem.”  According to News Track India, Singh described “paid news” as a “curse.”

In a Dec. 30 article, the Times of India reported that an Indian district administraction plans to establish a committee to monitor paid news in Indian newspapers about elections.  As the Times of India explained, “praise or a criticism of a particular candidate will come under paid news.”

We wrote in December 2010 when India’s press council held a seminar to focus on “paid news,” which the council called “dangerous for the survival of democracy.”

According to the council’s findings, which we wrote more about in this February 2011 story, the report found that “many” of India’s “big newspaper houses” had allowed “paid news,” which is described as “advertising in the garb of news.”

To counter “paid news,” the council advised Indian media to disclose news that is really advertisement, to differentiate news from advertisements and to include bylines on news articles.