Inside the Drake-Chris Brown Fake Video: Interview with the Hoaxer whose Vi 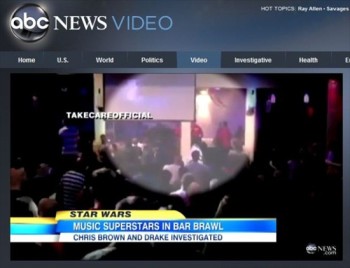 Last month, media outlets such as ABC News’ Good Morning America, WPIX, and the New York Daily News were duped into posting a months-old video claiming to depict the June bar brawl between the entourages of rappers Drake and Chris Brown that left Brown, NBA player Tony Parker and other bar patrons injured.

But, tricking people into using the phony Drake-Chris Brown video wasn’t just for the entertainment of the hoaxer, Torrey Hughes. Hughes seized the opportunity to play the media, which were hungry for footage, into driving traffic to his website.

“This story in particular was a gem because I had the perfect video and there was no copy of a video online,” he told us via email. “Naturally, the media would hop on it if it picked up enough attention.”

All Hughes had to do was dig up his old video of a bar fight, label it with Drake and Chris Brown’s names, and watch the media and YouTube users distribute his video without permission. Then he filed copyright claims on all the unauthorized uses of his video so YouTube would replace those links with a notice that amounted to free advertising for his company.

After seeing our earlier story, Hughes contacted iMediaEthics and laid out his “viral marketing technique.”

As we wrote June 15, media outlets posted a June video from YouTube user “takecareofficial” that purported to show the June 14 fight. But the video had previously been posted in February by user “phreaktor1,” therefore making the “takecareofficial” video a phony. (GossipCop debunked the video as a phony once the video appeared on HollywoodLife, and we later spotted it on mainstream sites.)

Since our original report, we found that ABC News, The Hollywood Reporter, AOL and Power 953 also used the fake Drake-Chris Brown video. Some of the news outlets directly posted the YouTube video, but Good Morning America and WPIX cut the YouTube video into on-air segments. Several other sites simply re-published WPIX’s segment with the fake footage.

Hughes, who identified himself as “the owner of Hughes Wave Motion Machines,” said he operates only the “phreaktor1” account and that “takecareofficial,” which YouTube has since terminated due to terms of service violations, “stole” his video.

How Hughes Hoaxed the Media

After seeing news stories about the alleged Drake-Chris Brown fight, Hughes said he remembered that months earlier he had posted a video of a New Jersey bar fight that could pass for it. “An individual was hit with a liquor bottle, security was involved, it was in a ‘VIP’ section of the nightclub, etc,” he told iMediaEthics.

Hughes figured that the Drake-Chris Brown news story combined with his old fight video could help him make money through Google ads and promote his company, which he said sells lava machines and makes “custom kinetic liquid art displays.”

“When the story aired, it was clear that there was no video of the incident and that I could direct quite a bit of traffic to my video,” he wrote.

Like many people, Hughes embeds ads in his YouTube videos. Every time someone clicks on one of the ads on one of his videos, he gets paid. By turning his innocuous February video into a video of a high-profile fight involving celebrity names, he could create YouTube profits, he said. And the more people who view his videos, the more potential ad-clickers.

By re-posting his original video and adding “keywords and titles based off of what was happening in the media at any given time,” he found he could make his February bar fight video viral.  Currently, his February video has upwards of 70,000 views.

See above the February 5 “phreaktor1” YouTube video, updated with tags and headline to claim it was from June and involved Drake and Chris Brown.

After people saw, shared and re-posted his video, Hughes explained he “could file copyright infringement claims on each and every one of them.” He wrote:

“The way YouTube’s Copyright Complaint form works is that once your claim has been verified, they will remove the infringing content and replace it with a placard that states ‘This video is unavailable due to a copyright claim by (insert name)’.  In my case the name was www.wavemotionmachines.com.”

According to Hughes, he filed “approximately 150” such complaints.

See below a screenshot from an ABC News segment that used Hughes’ fake video, wrongly crediting the footage to “takecareofficial.”

See above a screenshot of an ABC News segment posted on YouTube that used part of Hughes’ video. The segment as published above wrongly credited “takecareofficial” for Hughes’ (“phreaktor1” on YouTube) video and has since been taken off YouTube.

Because of this, news sites and YouTube users who picked up his video got his copyright claim notice, he wrote, and their posts “essentially turned into free billboards for my website.” Hughes noted he doesn’t get paid for filing copyright infringement claims. See below one of those “free billboards” on YouTube, posted where the ABC News video had been.

See above what Torrey Hughes calls “free billboards” for his site. After Hughes filed copyright infringement claims with YouTube, these banners replaced unauthorized re-publications of his video. (Credit: YouTube, screenshot)

The free advertising boosted his site’s traffic.  He estimated that he went from one to two email requests daily to six or eight.  “That is an enormous amount of potential customers,” he wrote.

Hughes added that he is looking into possible legal action against ABC News and WPIX, outlets that used his footage during regular news segments and credited it to “takecareofficial” instead of his YouTube account, “phreaktor1.”

We wrote to ABC News July 7 asking about Good Morning America’s publication of the video.  After hearing from Communications Vice President Julie Townsend saying she was still looking for answers to our questions, we pushed our deadline back.  The video was still on ABC’s website as of July 10 at noon. By 12:45 PM EST, the video link went to a “Page Unavailable” note, but the video was back up by 1 PM EST.  We will update with any response from ABC News to our questions.

We have written to WPIX asking if they’ve received copyright infringement claims and will update with any response.

UPDATE: 7/10/2012: 6:33 PM EST: Looks like ABC News has taken the video down.  The link where the Good Morning America segment  was located now directs to a general page where ABC News videos are featured without explanation or disclosure. See here.

“We believed this video to be authentic when it aired.  Reasonable questions have been raised, and we’ve taken down the clip while we look into it.”

We’ve also asked if ABC News will run a correction and if it has received any copyright claim. We’ll update with any information.