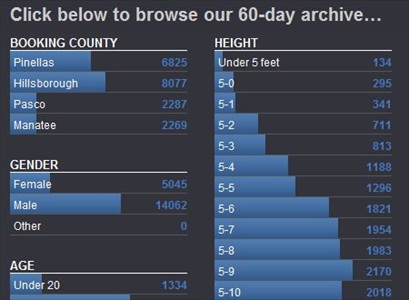 The ethics of news organizations publishing mugshots is an issue that iMediaEthics has written about a few times before (see here and here).

He concluded that the Tribune handles the mug shots much better – and more ethically – than St. Petersburg Times because the Times just dumps mug shots on its website without a news hook.

According to Miner, mug shots taken in Tampa, Florida “automatically” end up on the web.

“When the four sheriffs’ departments in the Tampa region put mug shots on their own websites, voila, they show up at tampabay.com. It happens to anyone arrested for any reason, even a reason as petty as driving on a license that expired eight days ago,” Miner explained.

However, in Chicago, reporters must get the mug shots from police officers — instead of finding them already posted online for them.

Also, Chicago Tribune’s editor, Bill Adee, reportedly told Miner that with each mug shot, the Tribune’s website posts a caption with a link to a story about the alleged crime.

“We have a mug shot and a caption and we link a story to that caption,” Adee is quoted as saying. “That really sets the bar. We use mug shots where there are stories to set the context.”

Regardless of how these news sites get the photos, Miner focused on the question of — Is it OK to publish these mug shots in the first place?  After all, much like crime reports, don’t mug shots suggest guilt?

“Everyone whose mug shot is taken is a suspect presumed innocent. Some will actually turn out to be innocent; others, innocent or not, will see their charges knocked down or dismissed entirely,” Miner noted.

According to Miner, some mug shot sites do include disclosures such as “An acquittal or dismissal of a criminal charge does not necessarily negate the validity of an arrest” and reminders that arrests aren’t convictions.

Having an expiration date on the photo’s publication mirrors how some news people have considered  handling crime reports and growing unpublishing requests.  The Tribune’s Adee is quoted as saying that “if charges are dropped, we drop the mug shot.”

In the comments section, Edward Wasserman complimented Miner’s article and somewhat criticized news outlets for publishing just initial reports of alleged crimes (like mug shots and police blotters), but then not following up with the result of any police charges.

Wasserman, a Knight Professor in Journalism at Washington and Lee University wrote:

“The traditional newsroom practice of publishing arrests without ever following up on dispositions of the cases has never really been defensible, but it’s really problematic in the Internet age when news of arrests is universally available (and practically speaking, imperishable.)

“An acquittal or a dropped case is essentially no different from a correction, and if media organizations, to their credit, are more aggressive now in setting right often trivial errors they make, they ought to bring the same zeal toward clearing innocent people of baseless reputational harm that they, in the normal course of doing what they consider their duty, have done a great deal to cause.”

iMediaEthics has written to Wasserman verifying that he did write the comments attributed to him and to see if he had any further comment regarding mug shot or crime report publishing. We will update with any response.

Chicago Tribune’s “Mugs in the News” site features this disclosure: “Arrest and booking photos are provided by law enforcement officials. Arrest does not imply guilt, and criminal charges are merely accusations. A defendant is presumed innocent unless proven guilty and convicted.”

St Petersburg Times’ site, “Mug Shots” offers a variety of ways for the public to search mugshots published on its site, including by height, gender, age and booking county.

In a disclosure statement, “Mug Shots” explains:  “The booking mug shots and related information are from arrest records in the order and at the time the data was collected. Those appearing here have not been convicted of the arrest charge and are presumed innocent. Do not rely on this site to determine any person’s actual criminal record.”

iMediaEthics has written to both the Chicago Tribune and St Petersburg Times’ Mug Shots for comment and will update with any response.