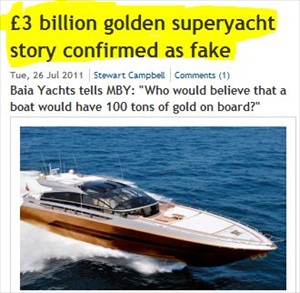 Motorboat and Yachting magazine revealed that there is no $4.8 billion "super-yacht." (Credit: MBY, screenshot)

Motorboat and Yachting magazine reported in late July that a “£3 billion golden superyacht story” is a fake.

The superyacht story claimed that an unnamed Malaysian businessman “spent $4.8 billion on a superyacht covered in platinum gold.”  Many of the reports were accompanied by a handful of photos of the boat’s exterior and interior.

According to the Sun, the boat was described as “the most expensive on the planet.”  The pricy yacht was reported on by numerous media outlets including The UK Sun, Ireland’s The Journal, AOL Travel, The UK Metro and others.

But, Motorboat and Yachting (MBY) reported that the boat pictured is not a multibillion dollar super yacht.  Instead, the photographed yacht is a Baia Yacht, and worth in the millions, not the billions.

Baia sales manager Mario Borselli denied the story to MBY.  According to Borselli, the pictures used to accompany the story were taken “from our website without our permission” and questioned “Who would believe that a boat would have 100 tons of gold on board?”

In a separate, earlier report, MBY also questioned the story because the boat’s buyer was identified as an “anonymous Malaysian businessmen,” which MBY noted could only be two people (“only three people in Malaysia have the kind of cash to buy such a boat, and one of them is discounted because she’s a woman.”)

He also confirmed that the pictures were of “his company’s model — the Baia 100,” which “costs only 8.5 million euros (US $12.1 million) and had no gold applications.”

iMediaEthics has written to Baia Yachts and Borselli for further comment and will update with any response.