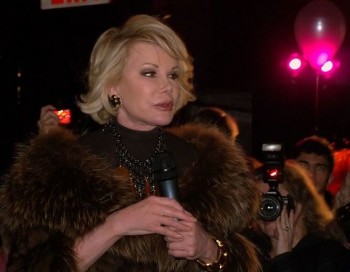 Why did the New York Times have a reporter who is a former patient write a favorable article about Dr. Gwen Korovin?

The Nov. 5 article “For Joan Rivers’s Doctor, Fame Delivers Its Bill,” reads very positively about Dr. Gwen Korovin. Korovin, identified by the Times as “a prominent ear, nose and throat specialist,” was in the room when Joan Rivers “stopped breathing and went into cardiac arrest” in August during a laryngoscopy and endoscopy.

Korovin “began a second laryngoscopy” on Rivers despite being “authorized only to observe,” CNN’s anonymous sources said. Another anonymous source “close to the doctor” denied she conducted “an unauthorized procedure” or that she took a selfie with Rivers under anesthesia, CNN reported.

The article, by Times reporter Jacob Bernstein, lists Korovin’s celebrity clients, quotes patients praising her, and portrays her as a sympathetic person in light of Rivers’s death. Bernstein is the son of Nora Ephron and Carl Bernstein.

The report opens by describing Korovin’s office hallway as decorated with celebrity platinum records and photos with famous people like Martha Stewart and Pavarotti.

But only deep in the story is there a disclosure that the reporter is a former patient of Korovin. The disclosure itself is quickly overshadowed by the name-dropping in the statement of Bruce Springsteen and Elvis Costello, in iMediaEthics’ view.  The disclosure reads:

“(Disclosure: I was briefly a patient of Dr. Korovin’s in 2010, when a plastic tip from my headphones got lodged in my ear. While I was in the waiting room filling out paperwork, I looked up and saw Bruce Springsteen standing there. In the examining room, a nurse told me that my appointment had been sandwiched between those of Mr. Springsteen and Elvis Costello.)”

This raises many questions:

Why did the Times allow a reporter who is a former patient of the doctor to write a lengthy report on the doctor? Was there no other reporter at the Times who could cover Korovin?

Why was the disclosure buried in the article as opposed to being published prominently at the top or the bottom of the article?

For what reason did the Times decide this wouldn’t be an apparent or real conflict of interest for the reporter, especially as the article reads somewhat like a puff piece for the doctor?

When we checked out the reporter Jacob Bernstein’s Twitter, he continued the name-dropping when sharing his article.

Gwen Korovin was the doctor who treated @ladygaga, @RealHughJackman and @TheBossFanPage . Then Joan Rivers died…http://t.co/docd6sSmgm

Dr. Gwen Korovin treated every celeb in Hollywood. Now @theebillyporter and others defend her in the aftermath of @Joan_Rivers‘ death.
— Jacob Bernstein (@BernsteinJacob) November 6, 2014

Dr. Gwen Korovin was known for being close to her celebrity clients. In the case of Joan Rivers, perhaps too close http://t.co/heed4uNIcS

iMediaEthics has asked the New York Times and Bernstein for comment and why the newspaper didn’t assign a reporter who hadn’t been a patient to the story. We’ve also asked Korovin’s lawyer for comment.