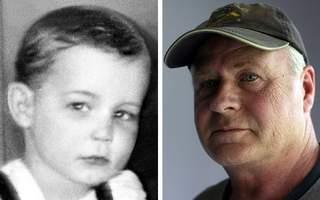 Was John Barnes, the man on the right, also Steven Damman, the toddler on the left, who disappeared outside a Long Island NY store, in 1955? The NBC TODAY Show interviewed Barnes Thursday morning only to find out by early Thursday night that the FBI's DNA results proved Barnes was not the same person as the boy.

The facts were not in yet, but that didn’t matter. AP launches the story on Tuesday, June 16, 2009. Television news was soon a’ buzz. By Wednesday, ABCNews.com’s headline was, “Finding Steven Damman? Family Waiting for DNA Confirmation.” The New York Daily News headline blared on Thursday’s front page : “Baby Face Picture that may tell 1955 kidnap story.” The key word was “may.”

The media went ahead, and without any real evidence, reported that a Michigan man, John Robert Barnes, may be the same person as the missing 2 year old boy, Steven Damman, kidnapped in 1955. The FBI had not finished their DNA testing to confirm or deny if the man’s claim, that he may be the missing boy, were true. Yet, the NY Daily News’ “poll” pressed readers to guess: “Based on the baby photo and the picture of John Barnes, do you think they are in fact the same person?” Another Daily News headline stated “Damman family hopes boy is coming home after 54 years of heartbreak.”

Hope, guessing…So why didn’t the media wait? Couldn’t the NBC TODAY Show have waited for the FBI results before interviewing Barnes and the victim’s family Thursday morning? Perhaps now they wish they did.

By early Thursday evening, Newsday got the non-news scoop! They go from not knowing if it’s a story or not, to knowing for sure that it isn’t. The headline? “FBI : John Barnes is not LI boy who was kidnapped.” They write: “The FBI said DNA tests conducted on John Robert Barnes, of Kalkaska, Mich., found he could not, in fact, be Steven Craig Damman, who disappeared on Oct. 31, 1955, after his mother left him in front of a Food Fair supermarket in East Meadow while she shopped.”

If that were not enough, the Newsday reporters reveal, “In addition, a certified birth certificate obtained by Newsday on Thursday through Barnes’s father shows John Barnes was born on Aug. 18, 1955, in Pensacola, Fla. That would make him less than 3 months old at the time of the disappearance. Damman was nearly 3 years old when he vanished and sparked one of the largest missing-child hunts in Long Island history.”

Didn’t AP, Daily News, NBC TODAY or ABC News, or the FBI for that matter, stop to think about asking Barnes’ father to see the birth certificate before all of this hoopla and heartbreak?

Frankly, this lack of evidence is no surprise. Any non-news is comprised of non-evidence, of course.

1. The man’s feelings: Barnes felt he didn’t look like his parents or siblings, but looked more like the missing boy’s family.
2. Barnes and his would-be “sister” (sibling of the missing toddler), Pamela Horne, took a “home DNA test in March” (whatever that is?). CBS News reported, “He said it indicated they could be related.”
3. The 1955 baby photo of the missing boy sort of looked like the Michigan man as a baby and now.
4. The 2 year old missing boy had a “mole behind his right calf” (according to NY Daily News ) or “mole behind his ear” (according to Newsday) and a scar under his chin, which Barnes said he also has 54 years later.

The FBI’s DNA test results would be definitive. Without it, all of the above was irresponsible speculation–when it was only a matter of hours and days to wait for the truth. But was this case ever a matter of truth in journalism?

The media feasted on this story like it was their last meal. They were not worried about protecting: The victim’s family from false hope; or Barnes, who may have mental or emotional issues; or the public, who went on a wild goose chase of media hype, that even implied that Barnes’s real father, Richard, could face a possible criminal investigation.

ABC News quoted the father of the long lost boy, Jerry Damman: “It’s too bad to have all this going on and then it not mean anything. It’s been very emotional. The whole thing is very emotional.”

For a sense of scale: Newsday published 12 news stories in three days and a photo gallery with 22 images. 6,770 Google results came up for a key word search, “John Robert Barnes, 1955 kidnap” Thursday night. By 8:30am, Friday morning, the Google result increased to 7,270.

This case of non-news–of “the almost, could be…but isn’t news” type–reminds me of a news story we wrote about that featured a man who was almost attacked by a pit bull. Think about the appeal. News stories about things that “may” or “almost” happen offer endless possibilities.

UPDATE: 06/19/09: 8:40am.EST: According to AP, who helped start this mess with its June 16 report, it’s not the media who will suffer the fall-out from its botched reporting. They point the finger at John Robert Barnes.

AP reports: ” ‘ He pretty much lost two families today,’ said Cheryl Barnes, a sister who grew up with the man in northwest Michigan. ‘We knew that was going to be the outcome. … My dad feels the same way. Neither of us had a doubt. My dad knows who his son is. I’m angry at my brother for putting everyone through this, turning everybody’s lives upside down.’ ”

This June 19 AP report takes no responsibility for publishing too soon or being wrong.

AP doesn’t blame NBC Today Show for its impulsive behavior, but instead suggests that it was Barnes–and only Barnes–who went too far. They write, “He [Barnes] even went as far to travel to Iowa to try and get a glimpse of the man he thought was his father, and connected with the sister of the missing toddler, Pamela Damman Horne. He said they took an at-home DNA test, and that’s when the FBI took a test of their own.”

Does the AP simply print what “a laborer who lives in rural northwest Michigan” tells them without verification when his behavior may indicate mental problems–and that’s okay with AP management?

AP also goes on to excuse themselves, without saying so, regarding their dubious belief that the missing toddler’s photos resembled Barnes.

Note here, that AP offers themselves as identification experts, while providing excuses for why they published this non-news story. AP writes, “Barnes did bear a striking resemblance to a photo of the missing boy: He had the same chubby cheeks, the same round face and bright, blue eyes. And there was a faint line on his chin, possibly the scar the missing toddler was said to have on a missing persons flier at the time of the disappearance.”

AP even tries to flatter themselves by suggesting they recognized, despite all this evidence, that “there were inconsistencies.”

Okay, but if they recognized wonky facts, why didn’t they spare everyone and do a better job of examining the evidence, and THEN, before publication, come to a conclusion about the truth or falsity of Barnes claim? AP even tries to cover their tracks with lame excuses for not asking Barnes’ father for the birth certificate, and not mentioning in their first June 16 report that Barnes’ age makes his claim impossible. Again, they blame John Barnes.

AP now states, “Barnes said he was born in 1955 – the same year a 2-year-old Stephen Damman disappeared – but only saw his birth certificate once and said he doesn’t have a copy. He wouldn’t explain the age difference and said only that the FBI was looking into it as part of his investigation.”

Ironically, the AP report ends with the missing toddler’s half-brother’s statement: ” ‘We didn’t hold out a lot of hope that it was true,’ Dwight Damman said. ‘After the pictures came out it kinda made you think, but with DNA you have to wait for the results.’ ”

Too bad AP and the other media outlets were not as smart as Damman.