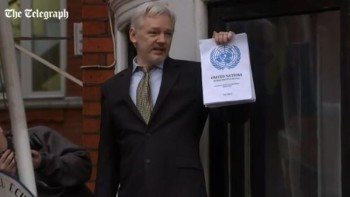 Julian Assange’s detention is “arbitrary,” the United Nations’ Working Group on Arbitrary Detention decided in a Feb. 5 report. “The Working Group also considered that the detention should be brought to an end and that Mr. Assange should be afforded the right to compensation,” the report said.

Assange, who has been living in the Ecuadorean Embassy in London since June 2012, asked the U.N. to look into the matter back in 2014, the BBC reported. noting “the panel does not have any formal influence over the British or Swedish authorities.”

Assange went to the embassy years ago to avoid extradition to Sweden for questioning about sexual assault claims, after his various appeals on the extradition failed.

“The U.N. Working Group on Arbitrary Detention characterized its ruling as a ‘moral recommendation.’ The group concedes it is up to member states to act on its decisions, explaining it can only investigate and ‘recommend remedies such as release from detention and compensation.'”

The UK disagrees with today’s U.N. ruling, arguing that Assange’s stay in the Ecuadorean embassy was by his own choice. A Downing Street spokesperson told the BBC: “We have been consistently clear that Mr Assange has never been arbitrarily detained by the UK but is, in fact, voluntarily avoiding lawful arrest by choosing to remain in the Ecuadorean embassy.”

The British foreign minister Philip Hammond said, according to Reuters, that Assange “is hiding from justice” and criticized the ruling saying:”This is frankly a ridiculous finding by the working group and we reject it.” In a tweet, he repeated “I reject the report.”

#Assange is a fugitive from justice, voluntarily hiding in the Ecuadorian embassy. I reject the report from #UNWGAD.

Assange said he would have let the British police arrest him if the U.N. ruled against him.

Assange: I will accept arrest by British police on Friday if UN rules against me. More info: https://t.co/Mb6gXlz7QS pic.twitter.com/mffVsqKj5w

iMediaEthics has written to one of Assange’s lawyer for more information about how the panel report affects Assange.

Sky News' Andrew Bolt sorry for 'hit on' comment about grooming
Corrections: The Roomba didn't do it! Irish Libel Law, Irish or British, How many Troops Abroad?