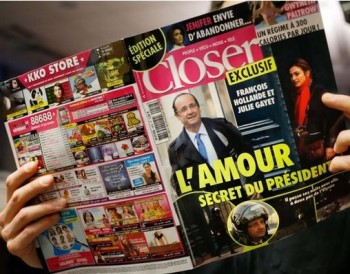 A copy of the magazine in question (Credit: BBC/closer, screenshot)

Actress Julie Gayet is suing French magazine Closer for invasion of privacy after Closer published a seven-page report with photos claiming she is having an affair with French president Francis Hollande.

Gayet wants “50,000 euros for alleged invasion of privacy plus 4,000 euros in legal fees, according to the magazine,” CNN reported.  Additionally, according to Agence France-Presse, “if she wins, Closer will have to publish the legal verdict on its cover page.”

Hollande said in a press conference he didn’t plan to take legal action, according to the Guardian. However, he said the Closer report showed a lack of “respect for private life and people’s dignity,” Sky News reported.

According to France 24, Hollande explained why he isn’t suing: “When pressed about his prior threat to take legal action against Closer at a Tuesday press conference, Hollande replied that he had decided not to sue the magazine for invading his privacy because as head of state he was immune from being sued himself and did not want to create a double standard. He never, however, denied the reported affair.”

Hollande is not married, but has a longtime partner, Valerie Trierweiler.  They’ve “lived together since 2007,” and she serves as First Lady, according to Canada’s CBC. Trierweiler has been in the hospital since the affair allegations emerged. According to the BBC, her aides say the hospital stay is for “rest and some tests.”

Closer magazine editor Laurence Pieau said the magazine was unpublishing the allegations after getting an injunction from Gayet, a French actress, as iMediaEthics has written. The issue at hand is invasion of privacy — not accuracy.

Despite unpublishing the allegations on its website, the magazine has left its print copies on the stands. According to the AFP, the magazine expected to “sell 600,000 copies of its edition…twice is [sic] usual circulation.”

Closer is the same magazine that in 2012 published topless photos of Kate Middleton, the Duchess of Cambridge. The UK Royal Family sued the magazine for invasion of privacy and got an injunction against it.