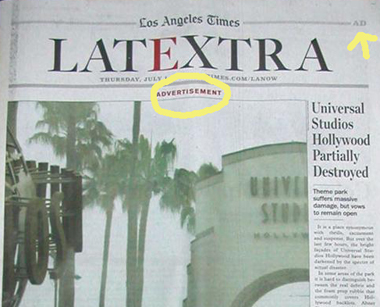 This screenshot of the LA Times advertising wrap shows that while the LA Times did include an "Advertising" label, it was small compared with the rest of the text. (Credit: Visual Editors)

Los Angeles county’s board of supervisors called out the LA Times for its advertising wrap of the newspaper July 1, Eric Sass wrote on MediaDailyNews July  2.

The newspaper featured a four-page advertisement which wrapped the LATExtra section.  The ad was for a new King Kong attraction at Universal Studios Hollywood.   The first page is labeled “ADVERTISEMENT” in red letters, and the inner pages are labeled “ADVERTISING SUPPLEMENT.”

The five supervisors for Los Angeles county wrote July 1 wrote that the county’s residents “need the Times to be a credible watchdog, scrutinizing the performance of the Board of Supervisors as well as all other levels of government. Today’s mock section front makes a mockery of the paper’s mission.”

They called the practice “offensive and alarming” as well as distasteful.

The LA Times reported July 2, noting that the newspaper’s publisher Eddy Hartenstein backed the advertisement.  The newspaper also published a selection of readers’ responses, which called the ad wrap irresponsible and damaging to readers trust.

“The Universal Studios Hollywood ad wrapping Thursday’s LATExtra section met our advertising guidelines, including a large, red ‘advertisement’ notification on top of the page.” The LA Times reported Hartenstein said. “Our readers understand the ad-supported economic model of our business, which allows us to provide the outstanding journalism they rely upon 24/7.”

Andy Bechtel, who teaches copy editing at UNC-Chapel Hill, blogged July 1 that advertisements disguised as news aren’t a new trend, butin this instance, the LA Times masked it well.  Bechtel wrote that ordinarily the advertisements use noticeable design elements to clearly indicate they are ads, but the LA Times’s most recent ad is “harder to decipher.”

Noting the ad does feature the word advertisement in red, Bechtel wrote that the label is small and the page uses the typical LA Times section header and folio.

“These are subtle clues that could be overlooked everyday readers. I imagine that many L.A. readers thought this was a real event being reported, edited and presented by a reputable newspaper. It doesn’t help that an actual fire hit this amusement park in 2008, a story that was covered extensively by the LAT in print and online.”

As a former LA Times employee, Bechtel wrote it’s “a sad moment” and that the newspaper risks destroying its integrity.

Charles Apple, a freelance visual journalist, blogged on Visual Editors, remembered that the LA Times has done this before. StinkyJournalism reported March 6 when the LA Times sold a cover wrap to Disney to promote its new “Alice in Wonderland” movie.

But, Apple wondered why the newspaper decided to let this ad fool readers.

But, not everyone believes the LA Times ad wrap was that big of a deal.  Dennis Romero blogged July 2 on LA Weekly that the ad wrap wasn’t that significant “because we haven’t picked up a weekday edition of the paper since Bill Clinton was president. It’s an antiquarian’s debate.”

StinkyJournalism wrote March 6 when the LA Times pulled a similar stunt before for another movie. See “Los Angeles Times Sells Its Front Page For Disney Ad.” We also reported May 2 when they started adding advertising links in its stories.   The e-commerce links are featured in green (while editorial links are blue).

In April 2009, the LA Times printed a front-page column ad for the TV show “Southland.”