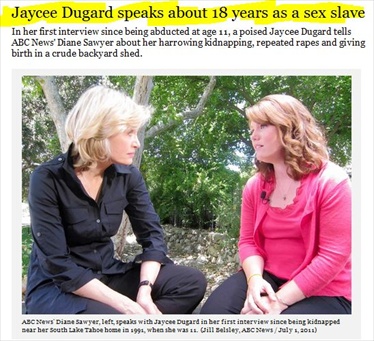 The story (see here) reported on a recent interview ABC News conducted with Dugard. Dugard was kidnapped when she was 11 years old and held “captive” in a backyard shed for eighteen years.

According to Edgar, “editors who worked on the story…agreed, in hindsight” with readers that a more sensitive and accurate term would fit Dugard’s kidnapping.  One reader suggested “kidnap victim” in lieu of “sex slave,” according to Edgar.

Assistant copy desk chief Jim LaVally reportedly commented that the sex slave label, on reflection, is “loaded with mostly lurid connotations. And it robs the victim of dignity. I think we can find an acceptable alternative.”

Edgar noted that in a later article that week on Dugard the Los Angeles Times simply referred to Dugard by name and without a label.