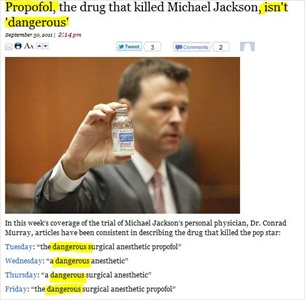 Responding to complaints about its Michael Jackson death coverage, Los Angeles Times  readers representative Deirdre Edgar wrote Sept. 30 that the newspaper has inaccurately labeled propofol, “the drug that killed the pop star” Michael Jackson in 2009.  As Edgar explained, a reader complained after a series of articles by the Times that identified the drug as “dangerous.”

The drug, according to the reader Jim Gould and drugmaker AstraZeneca’s website, is “approved for use in children as young as 2 months” and is more accurately described as “powerful,” Edgar wrote.

As Edgar explained: “The key, of course, is in how the drug is used.”