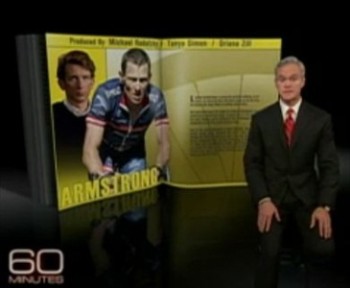 60 Minutes reported that “three of Armstrong’s teammates have testified to a federal grand jury that they saw” Armstrong taking performance enhancing drugs, according to SFGate.com.

As ESPN.com reported, “If it’s all true, if the mounting pile of evidence collecting at Armstrong’s feet contains facts and not some broadly disorganized plan to smear the man and his legacy, then Armstrong is a fraud.” ESPN added that Armstrong created a website, facts4lance.com, to counter Hamilton’s 60 Minutes allegations.

On that site, Armstrong’s counsel, Mark Fabiani, accused 60 Minutes of violating journalism ethics by being unfair, sensational and reliant on “dubious sources.”  Fabiani also called Hamilton a “confessed liar” who “managed to dupe 60 Minutes, the CBS Evening News, and new anchor Scott Pelley.”  Armstrong also criticized the reporting of 60 Minutes, according to SFGate.com, calling it “replete with broken promises, false assurances and selective reliance on witnesses upon whom no reputable journalist would rely.”

The Guardian noted that these recent allegations are different from previous ones because they were made in front of a grand jury and “the justice department and FBI have the powerful weapon of subpoenaing witnesses and compelling them to testify under oath.”

See iMediaEthics previous reporting on Armstrong, including our articles about the conflict of interest CNN’s Sanjay Gupta has in interviewing Armstrong given Gupta’s role on Armstrong’s LiveStrong foundation board, here.