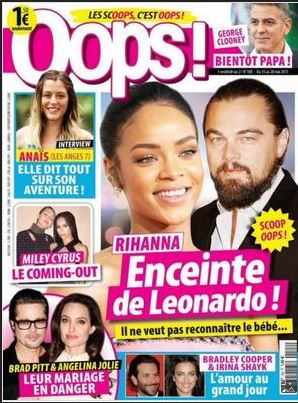 Leonardo DiCaprio is suing over this cover story claim that he impregnated Rihanna. (Credit: Oops)

Leonardo DiCaprio has announced a lawsuit against the French magazine Oops!

Other stories on the cover claim George Clooney is going to be a father, that Miley Cyrus is coming out as a lesbian and that Brad Pitt and Angelina Jolie’s marriage is in danger.

“DiCaprio is seeking the maximum by French law of 18,000 Euros, which is approximately $20,000 in damages and legal fees,” Gossip Cop reported.

The lawsuit is over privacy, not defamation. “The lawsuit points out that Oops! does not have the right to print information about DiCaprio’s personal life nor was it allowed to publish two paparazzi photos of him on the street,” according to Gossip Cop. “DiCaprio’s side is also asking Oops! to print a retraction on an upcoming cover, and if it doesn’t, his legal team has asked the court to impose a 10,000 Euro fine (approximately $11,100).”

Oops! published a story on its website confirming the lawsuit and saying that the case will be heard later this month, June 16 in Paris.

“The American actor obviously didn’t like the rumor: The war between Oops! and Leonardo is now declared!” Oops! said.