McCain's pin is not photoshopped

McCain’s pin is not photoshopped 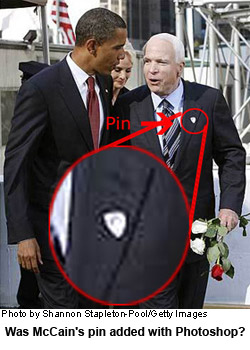 Was McCain's pin added with Photoshop?

The blogger carefully examined a set of photos of presidential candidates McCain and Obama at 9/11 ceremonies at Ground Zero. Obama was clearly wearing his flag pin, however McCain, the blogger pointed out, was only wearing a pin in one photo but not in others.

Matt Collins wrote on his blog, Collins Onovia, “I happened to notice something interesting. It looks to me like someone photoshopped a flag onto McCain. As far as I could find, there were no other photos with the flag.”

“Take a look at the following pictures,” he continued. “Do you think this flag pin was photoshopped?” he asked. (See figures 1A-1D.) A blogger questioned whether or not McCain’s lapel pin was Photoshopped in figure 1A, in contrast to figures 1B-1D. Red labels indicating “pin” or “no pin” in figures 1A-1D, were published by Mat Collins in his blog, Collins Onovia. Like a Tom and Jerry cartoon, the little guys—Collins/“Jerry” mice go after the huge “Tom” cats of inaccurate journalism. (See figure 1E.)

Most of the time, iMediaEthics’ efforts to fact-check bloggers’ claims of fake photos score Bloggers 1 vs. Mainstream Media (MsM) 0. The doctored, staged or miscaptioned “fauxtograph” is eventually confirmed in our investigations. Figure 1E: The Tom and Jerry cartoons are reminiscent of the power difference and antics between MsM (cast as “Tom” the cat) and bloggers (cast as the “Jerry” mice) whose revelations often create a MsM fall on a banana peel.

In the wild and wooly bloggersphere of often rude discourse, this sincere effort by bloggers to debunk photos pulling the wool over the public’s eyes is refreshing, even noble in our view. The Internet leveled the playing field. The once truthful maxim citing the folly of fighting anyone who owns a barrel of ink no longer holds.

However, lately I ran into two counter examples that I felt should be noted. One of the two is Collins’ case of the supposed photoshopped pin on McCain’s jacket’s left lapel. The second case I will leave for another article. It involves a photo of a dying man in a hospital room that bloggers publicly questioned.

I went to GettyImages and immediately noted an error on Collins part. There were at least 21 photos of McCain wearing the pin , not just one. Moreover, there was a pattern. The photos of McCain walking down the ramp into the ground zero “pit” had no lapel pin. All the photos showing McCain walking up the ramp showed him with the pin. (See figures 2A & 2B and 3A & 3B.) Figure 2A & 2B : McCain walking down the ramp has no pin on his left lapel Figure 3A & 3B : McCain walking up the ramp wears a pin on his left lapel

Someone must have “pinned” McCain with a FDNY pin– not a flag pin– sometime in the pit as he was walking around. That being true, there must be a photograph of this happening, I reasoned, as news photographers doggedly seek out such moments of human interaction.

So I kept looking through the three pages of 142 Getty Images related to McCain’s visit to ground zero until I discovered the answer. In fact both McCain and his wife were pinned by a FDNY firefighter in two separate photographs by Mario Tama and Timothy A. Clary, respectively. (See figures 4A & B.) My research time was a total of approximately 15 minutes. Photo by Mario Tama/Getty Figure 4A & 4B : No mystery—or photoshopped– pin here.  McCain and his wife were both “pinned” by FDNY firefighters as evidenced by these Getty photographs.

With a sense of urgency born of trying to stem further damage to a unnamed photographers reputation, I quickly posted my finding in Collins’ comments section. The problem was this was not a private moment between us. Collins had publicly questioned a photo before doing his full research. Photo by Timothy A. Clary-Pool/Getty Images

Here is what I posted on his blog. “Just some free advice; so take it for what it’s worth.

“It is very good to ask questions and even better to doubt photos. However, it is better still to do a few minutes of research before posting an article that will be picked up by others and start, in this case, false rumors.

“Any one of us can be wrong, but going to the big photo archives like Getty and looking at all the shots BEFORE publishing is important before making suggestions or allegations of fauxtography.”

It would be too easy to have let Mr. Collins off the hook, and left it with my comment, and forgo writing this article. After all, is it fair to highlight Collins’ error when he is a only a “Jerry” figure, and a little guy among big “Tom” media giants? 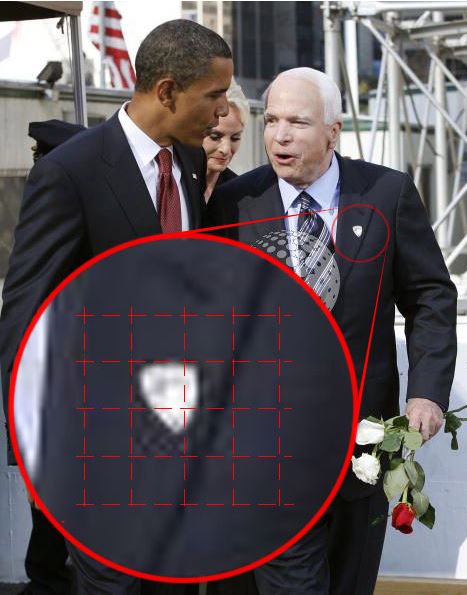 Photo by Shannon Stapleton-Pool/Getty Images Figure 5A (same as 1A): The original photo questioned by Collins has “quantization effects” incorrectly identified as possible photoshop work. Note: the pin is a FDNY pin; not a flag pin. 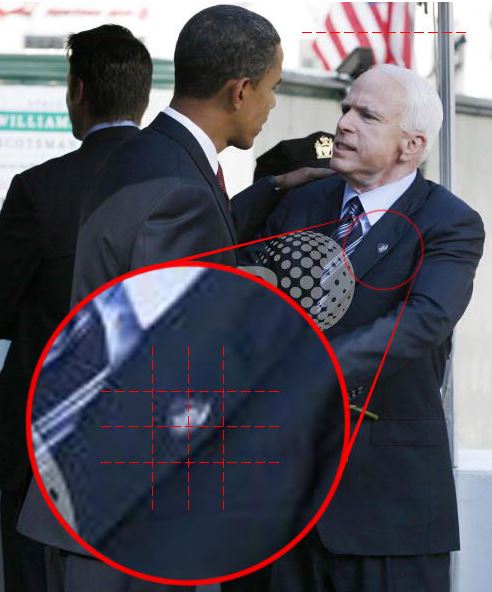 Photo by Shannon Stapleton-Pool/Getty Images Figure 5B : Other Getty photos by multiple photographers show the same quantization effects as observed in figure 5A.

With that said, iMediaEthics believes it is important to cover all sides of the fauxtography issue, including mistakes made by the citizen journalists/bloggers and not just the mainstream media. This is not just about fairness.

We “Jerrys” need to take responsibility for accuracy in our own community —just as we expect MsM to monitor and bust their own. Right?

Bloggers need to tirelessly apply the core value and discipline of verification that we, who investigate MsM, find missing or inadequate in MsM reportage or photographs.

Only by exposing blogger mistakes and investigating each other in the same way we investigate MsM, will positive growth in accuracy in the blogosphere occur.

According to the Society of Professional Journalists (SPJ) ethics code, in addition to having the obligation to do his homework, Collins should have also called Getty. Under a section titled, “Seek Truth and Report It,” the code cites “A journalist should… Diligently seek out subjects of news stories to give them the opportunity to respond to allegations of wrongdoing” before publication.

(NB: I later left an additional comment on Collins’ blog, providing my email address and asking him to contact me, as I was writing an article on blogger error. He has not responded).

Collins emphasized in his analysis of Photo 1A  (also shown as 5A on left) a magnification of a suspect square patch around the pin that could be evidence of Photoshop work–or results from compression software used to reduce the size of the photo.

Heavy compression used in JPEG image files typically creates what’s called a “quantization effect” that emerges in transition areas of texture, form and color. The shiny metal pin on top of the dark, matte wool jacket is an example of such transitions zones that result in quantization effects.

Figure 5B and other Getty photos by multiple photographers show McCain’s pin has the same compression artifacts seen in the original photo (figures 1A and 5A)  questioned by Collins.

I will give the photographer who shot 5A , Shannon Stapleton, the last word.  I asked him by phone what he thought about his photo being questioned by a blogger. I explained that , ” We [iMediaEthics] want to be rational and polite but tough. [We]  Look for the truth and report the truth.  We want to hold these bloggers as accountable as we do Reuters, AP and the others.”

Stapleton replied, ” I think that’s what journalists have all been asking for that to happen, for them to actually have some sort of accountability.”

He continued, ” It just amazes me. I have 2 kids and a mortgage. Where do these people get the time to do this stuff?  It blows me away.”

I don’t blame him for being angry. Like MsM, bloggers need to do proper testing of claims before risking people’s reputations.

Hopefully, Collins will soon follow another tenet of the SPJ ethics code:  “Journalists are accountable to their readers, listeners, viewers and each other.”  He should admit his mistake and correct it promptly.

Just wanted to let you know that I updated my posting on onovia.com. You were right, I did not fully investigate my posting before clicking submit.

On my site is an admission, and an apology.

Here is my response:

Thank you for your email. Bloggers take the heat from MsM for not having ethical practices. Nonsense. You show them here, a great example of how bloggers can, in fact, teach them a thing or two about how to behave. I will update my article to let readers know about your correction and apology.  It takes a big (and good) person to stand up and admit their errors. In my experience, MsM, rarely and only begrudgingly, corrects errors, despite all their bluster about bloggers. Mistakes happen; it’s how one handles them that counts. Good job.

McCain’s pin is not photoshopped