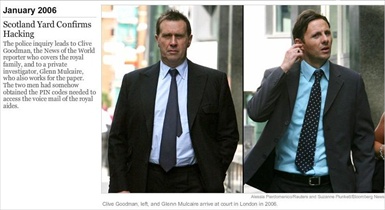 Pictured above from left to right, Clive Goodman, UK's News of the World former reporter and Glenn Mulcaire, a private investigator. Both were convicted of hacking into phone voicemail systems in 2007. The New York Times' report called the hacking part of a widespread culture at the British newspaper. (Credit: New York Times)

The New York Times published a lengthy, detailed report (“The British Tabloid Phone-Hacking Scandal”) accusing the British News of the World newspaper of permitting “a culture” of hacking into phones to get stories.

The News of the World is touted as “Britain’s biggest-selling newspaper” owned by News International, a subsidiary of Rupert Murdoch’s News Corp.

While only one News of the World reporter (now former employee), Clive Goodman, has been outed and convicted for hacking phones (in 2007), The New York Times extended accusations of hacking phone voicemail systems to part of the general “reporting” process at the News of the World.  The Times’s Don Van Natta Jr., Jo Becker and Graham Bowley reported the article.  The News of the World denied any culture of hacking, and “called on the Times ombudsman to investigate whether the report had been ‘free of any whiff of bias,'” The Financial Times reported.

The Times interviewed “more than a dozen former reporters and editors” for its account- of the News of the World culture.

The Financial Times noted this “spat” between papers is significant because it’s just six months after News Corp.’s Wall Street Journal debuted its Greater New York section, a competitor for the New York Times.  (See more on the “spat” in this Financial Times article and this Vanity Fair article.”

The hacking became public, according to the Times in late 2005, when “three senior aides to Britain’s royal family” realized that they had problems with their cell phones.  While the aides hadn’t checked or listened to messages, the messages were marked as already heard.  By Jan. 2006, “Scotland Yard had confirmed” that their phones had been hacked by two men – Clive Goodman, a “News of the World reporter who covered the royal family,” and Glenn Mulcaire, a private investigator “who also worked for the paper.”  The two had learned those three aides’ voicemail pin codes and later the pin codes of Princes Harry and William.

The Times’s report totals more than 6,000 words and includes a minute-long recording of a private investigator telling a journalist how to hack into someone’s voicemail, a response from the Metropolitan Police and a response from the News of the World.

The police wrote in an e-mail published on The Times’s site denying that the police didn’t do enough:

“The MPS rejects the suggestion by the New York Times that police ‘failed to follow-up on clear leads’ and ‘declined to pursue other evidence of criminality by others’ in relation to the News of the World phone hacking investigation.”

Scotland Yard learned through an investigation that “reporters at News of the World might have hacked the phone messages of hundreds of celebrities, government officials, soccer stars — anyone whose personal secrets could be tabloid fodder. Only now, more than four years later, are most of them beginning to find out,” The New York Times reported.

According to The New York Times, “as of this summer, five people have filed lawsuits accusing News Group newspapers … of breaking into their voicemail.”  So far, settlements with the newspaper haven’t been trivial:  one person has settled with the newspaper for a million pounds, and another was for 700,000 pounds.

In 2006, police found at Mulcaire’s home files with “several thousand mobile phone numbers of potential hacking victims and 91 mobile phone PIN codes.”  However, The Times claimed the police seemed to only investigate the hacking as it related to the royal family.  Mulcaire and Goodman were arrested in 2006 and “charged with conspiracy to intercept communications without lawful authority.”

“When police officials presented evidence to prosecutors, they didn’t discuss crucial clues that the two men may not have been alone in hacking the voice mail messages of story targets,” The Times wrote.  And, because the police centered its investigation on Mulcaire, The News of the World has suggested that Mulcaire was the only bad apple at the paper.

“During testimony before the parliamentary committee in September 2009, Les Hinton, the former executive chairman of News International who now heads Dow Jones, said, “There was never any evidence delivered to me suggesting that the conduct of Clive Goodman spread beyond him,'” reported The Times.

However, the Times quoted former News of the World employee Sharon Marshall as saying the hacking “was an industrywide thing.”  Marshall is reported to have also worked at other tabloids and explained:

“Talk to any tabloid journalist in the United Kingdom, and they can tell you each phone company’s four-digit codes. Every hack on every newspaper knew this was done,” Marshall is quoted as saying.

The Times described the News of the World newsroom as “a frantic, sometimes degrading atmosphere in which some reporters openly pursued hacking or other improper tactics to satisfy demanding editors.”

Outside of the ethical accusations against the News of the World, the article is of significance because the UK’s prime minister David Cameron’s communications director is Andy Coulson.  Coulson is a former News of the World editor who left his post after Goodman was convicted of hacking, and his involvement at The News of the World is brought up throughout the Times’s article.

The Associated Press reported that the British police are “considering reopening an investigation” as a result of the Times’s claims.

Regarding Sean Hoare, The Associated Press reported that the Metropolitan Police’s assistant commissioner John Yates “was particularly interested in statements by a former reporter, Sean Hoare, who told The Times that Coulson had asked him to hack into phones.”

The AP reported Yates told the BBC that Hoare “has come from nowhere,” and that “we are surprised that the New York Times did not alert us to this information earlier than they did.”

The Guardian noted that Hoare was let go from the News of the World because of alcohol and drug problems.

“The government last night commented on Hoare’s admission that he was sacked from the title at a time when he was struggling with problems with drugs and alcohol. Alan Duncan, the international development minister, told Radio 4’s Any Questions: “What they are seizing on today are the words of someone who had an alcohol and drug problem who was sacked by the paper,” The Guardian reported.

News of the World response

News of the World responded to questions from the New York Times in a letter from its managing editor Bill Akass. The published letter is edited “for clarity and to eliminate references to personal matters involving a former News of the World employee.”

Akass wrote that the Times “failed to provide any new evidence sufficient to support what amount to very serious allegations,” and accused the newspaper of reporting the story for competition reasons. Akass also noted that the News of the World investigated the hacking for eight months and denied that Goodman and Mulcaire’s hacking “were part of a ‘culture’ of wrongdoing.”

“It seems to us that your investigation has always been tainted by a vested interest in its outcome which means it is in serious and multiple breach of your own ethical guidelines.”

He called the Times’s claims “unsubstantiated” and the Times’s source Driscoll unreliable because he had “a very difficult relationship with the newspaper, which included disciplinary action for inaccurate reporting.”

Next, Akass brought up the Jayson Blair plagiarism scandal as a possible reason to discredit the New York Times’s sourcing of its accusations.

“You should also exercise extreme caution in your approach to what you are told by any ‘former reporters and editors’  and your readers should be made aware of any reasons why their views may be biased. I would ask you to consider, for example, what your reaction would be were Jayson Blair to make allegations now to a rival newspaper group about editorial practices and the culture at the New York Times, given that he left the paper approximately five years ago and a new editorial and executive team has been installed?”

The newspaper also responded in a statement published by The Guardian.  The statement critiqued the Times’s sourcing and accusations that the hacking was “widespread” :

“The New York Times story contains no new evidence – it relies on unsubstantiated allegations from unnamed sources or claims from disgruntled former employees that should be treated with extreme scepticism given the reasons for their departures from this newspaper. We reject absolutely any suggestion there was a widespread culture of wrongdoing at the News of the World.”

In response to an e-mail inquiry from StinkyJournalism, Don Van Natta, Jr., one of the reporters of the New York Times article, wrote that he had no comment and referred us to contact Times spokesperson, Diane McNulty.  McNulty wrote in an e-mail to StinkyJournalism that “We stand by our meticulous reporting that was based on sources with firsthand knowledge of the events.

“The story speaks for itself. I would just say, as we did to News of the World, that our only motive was a compelling story.”