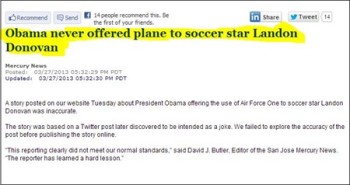 San Jose, California daily newspaper The Mercury News fessed up this week to being hoaxed by a joke tweet claiming that President Barack Obama was going to lend a soccer player Air Force One.

Obama to Landon Donovan: “You wanna take Air Force One to Mexico City? We can still make it. Just say the word.”

I didn’t think it needed to be said, but enough people asked. No, the President did not offer Air Force One for an athlete to go play a game
— Dana Wessel (@DanaWessel) March 26, 2013

But not before The Mercury News reported on Wessel’s tweet. Making matters worse, the News didn’t include any attribution for the story, as Media Bistro’s Fishbowl DC noted. The March 26 story, “President Obama to Soccer’s Landon Donovan: Take Air Force One,” read in part:

“‘You wanna take Air Force One to Mexico City?’ Donovan was asked Tuesday during a visit to the White House. ‘We can still make it. Just say the word.'”

Shortly after Media Bistro’s Fishbowl DC reported on the phony story as an example of “The Dangers of Reporting from Twitter,” The Mercury News unpublished the story. A link to the original report now goes to an error page.

That separate story rowed back the paper’s mistake by reporting that Obama hadn’t made those comments to Donovan and admitted the story was “inaccurate.”  In the March 27 story, The Mercury News said:

“The story was based on a Twitter post later discovered to be intended as a joke. We failed to explore the accuracy of the post before publishing the story online.”

Further, the News quoted its editor, David Butler, as saying the story “clearly did not meet our normal standards.”

No, more to the point, the story did not meet the normal standards of an elementary school newsletter. That a major American daily newspaper reported, as fact, something as patently absurd as the Commander in Chief loaning out the most prestigious flying machine in the nation to a soccer player is far more than a lapse in “normal standards.” A simple phone call to the White House Press Office would have sufficed to shoot this story down. That The Mercury News did not make that call begs the question: How much of the rest of their news content is regularly based on tweets, boops and beeps from similar unreliable sources?

In a follow-up email, iMediaEthics asked The Mercury News for an explanation about the lack of attribution in the original story, but we were  directed to the paper’s online statement.